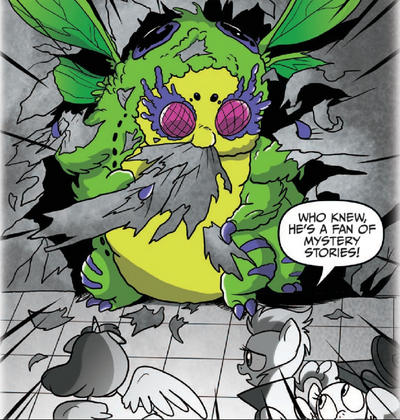 Bookworm was the main antagonist-turned-protagonist during the Storyworld arc of IDWs My Little Pony: Friendship is Magic comics, based off the television show of the same name. In his struggles to find a good story, Bookworm annihilated several realities, looking for a story he can truly relate to. While his intentions weren't bad, he ended up causing chaos for the denizens of Ponyville. He does have a good heart, though, and after he realized the errors of his ways, he attempted to fix the mayhem he caused.

Powers and Abilities: Portal Creation | Superhuman Physical Characteristics, Reality Warping (People within the Storybook world are capable of warping the entire world as they see fit, such as how Pinkie Pie turned a white void into a fantasy adventure, or how Rarity turned a science-fiction into a noir), Plot Manipulation (Similarly to the Reality Warping, beings within the Storybook world are capable of rewriting the plot of the stories they're currently in), Spatial Manipulation, possible Void Manipulation (Turned an otherwise filled out reality into a void of nothing), BFR (BFR'd the Queen into a Storyworld)

Attack Potency Below Average level (Outside of the storyworld, Bookworm is but a small worm) | At least Multi-Solar System level, likely far higher (Completely destroyed several Storyworld realities and left them as voids of nothingness. Should have the same powers to the Ponies, who in the Storyworld were capable of recreating entire worlds and warping them on a whim. Said realities contained a planet, a moon and a vast starry sky beyond it which requires this much energy. Though could be even grander in scale)

Speed: Unknown | At least Massively FTL+ combat speed (Should be comparable to Princess Luna. Kept up with Princess Twilight Sparkle)

Lifting Strength: Below Average Human | Unknown, Varies. Has demonstrated at least Class K via sheer size, but can potentially be far higher

Range: Unknown, Cross-Dimensional via Universe hopping, otherwise appears to be below standard melee range | Several Thousands of Kilometres (Can consume Storyworlds that contain a planet, a moon, and an unknown amount of vast space beyond that)

Standard Equipment: Books | Books. He can also create virtually any kind of weapon he desires due to the nature of his powers.

Intelligence: Reasonably High. Very knowledgeable of various literature and is very well versed in countless stories, books, and other works.

Weaknesses: Doesn't actually intend to hurt anyone, he just didn't realize how destructive his rampage was. Outside of the Storybook world, he is very small and meek.

Note: His powers within the Storybook world are innate abilities of anyone who enters the world, though the characters who enter may not have knowledge of their new powers.

Start a Discussion Discussions about Bookworm (My Little Pony)