VS Battles Wiki
Register
Don't have an account?
Sign In
Advertisement
in: Books, Weapons, The Evil Dead,
and 29 more

Book of the Dead 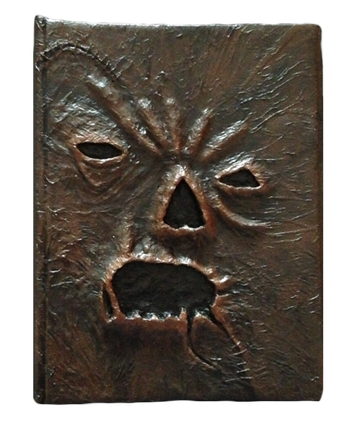 Necronomicon Ex-Mortis (Also known as "Book of the Dead" and "Naturom Demonto" in the original Evil Dead script) is the antagonistic object in the Evil Dead franchise. It has the power to harness The Force's ability to control both the dead and Deadites, as well as summon the Kandarian Demon itself. The spells on its pages are written in Sumerian and can be used only if they are said correctly. The book is unaffected by fire or any conventional damage and can only be injured by the Kandarian Dagger. However, as well as containing passages on summoning demons, the book also contains instructions on how to destroy them as well as clues about their motivations and aims.

Name: Necronomicon, Book of the Dead

Powers and Abilities: Magic, Invulnerability to physical damage, Regeneration (High-Mid; Regenerated from being almost reduced to ashes), Summoning (The reader can summon demons from hell by citing the passages from the book), Possession (It can also turn living people into its servants), Portal Creation, Teleportation via portals, Space-Time Manipulation (It can open portal in spacetime and can be used for time travel), BFR (Can send both people and objects through space-time, to the Deadlands or "Hell"), Interdimensional Travel (Can open portals to the Mirror Dimension, where The Dark Ones are imprisoned), Resurrection (Through the proper incantations located in the book, a reader can resurrect a deceased individual or even fully restore a corpse by repairing disintegrated flesh and the allowing the original spirit to re-enter the body. Resurrected Evil Ash, Its blood could reanimate Amanda Fisher as a Deadite. Resurrected hundreds, if not thousands, of people at the start of Ash vs Evil Dead), Power Bestowal (After being "de-faced", the Necronomicon can transfer its powers and spells to a human being), Reality Warping (The Necronomicon has displayed the ability to rewrite history or alter a predetermined destiny. Is repeatedly implied to have this ability. Caused a Cabin to bleed, and form eyes), Power Absorption (The Necronomicon demonstrated the ability to take on the characteristics of a living creature that it has trapped within its pages), Death Manipulation (The funerary incantations found within the book can be used to help the spirits of the deceased move on to another plane of existence), Sealing (Can seal demons, spirits, souls, Dark Ones and various other beings within its passages), Earth Manipulation (When using the book, Ruby opened up sink holes), Biological Manipulation (Ruby created new forms of demons using the Necronomicon), Necromancy (Has raised thousands of the dead), Power Nullification (Was able to nullify Baal's abilities through a deal made by Ruby), Transmutation (Gave the Kandarian Demon a physical form), Duplication (Duplicated Ash's body), Weather Manipulation, Mind Manipulation (The book can control demons and the Dead. Ruby stated she would have control of the entire Deadite and Demon population), Soul Manipulation (Suppressed the Deadite within a person), Durability Negation with many of its spells, Can conceal its presence with spells, various other powers (Has thousands of other unexplored passages — some of which have been entirely removed — known to only Ruby, and possibly Raymond Knowby. Spells and passages can be changed or added)

Range: Kilometers (The thousands of people resurrected were the people within a city. The sink holes it created were across a city area, as stated by the news report)

Weaknesses: The Kandarian Dagger can bypass its apparent invulnerability.