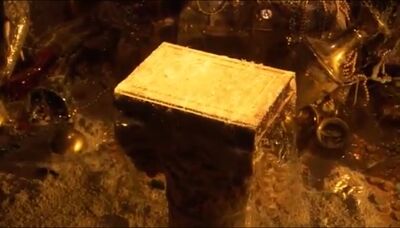 The Book of Solomon was a very powerful spellbook that was used by King Solomon to rule his kingdom. Due to its world-threatening dark powers, it was sealed deep in King Solomon's Mine and guarded by a group of people called Masons.

Attack Potency: Universe level+ (It controls all of space-time)

Durability: Unknown (It was destroyed when thrown into a pit of lava)

Retrieved from "https://vsbattles.fandom.com/wiki/Book_of_Solomon?oldid=4557327"
Community content is available under CC-BY-SA unless otherwise noted.