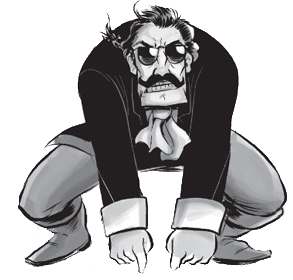 Book Cop was born under two book loving parents, only to accidentally kill them with his ability to generate fire. Fighting villains, Book Cop used mainly an array of books in order to eliminate local Bad Guys, by either bludgeoning them, impaling them with books or burning them. He was called to fight in the recent Revolutionary War after meeting his silent wife and singlehandedly fought off a Red Coat army before using a special move to kill every bad guy in the world. This however failed to kill the King of England, and so Book Cop surfed to England on a book, attacked with a wave of acid, and threw a book at the king to take all of his lives. This gave him enough fame to be on Mt. Rushmore.

Tier: At least 8-C physically. High 6-A with Wave of Fire Secret Attack

Powers and Abilities: Superhuman Physical Characteristics, Immortality (Type 1), Martial Arts, Weapon Mastery, Telekinesis, Homing Attack (Can control the trajectory of his books), Transmutation (By pointing at an animal he can turn it into whatever food byproduct comes from it), Fire Manipulation (Can generate fire from his hands and summon a planet-sized fireball), Body Puppetry (Telling someone to "look over there" will actually force them to turn and look in whichever direction), Poison Manipulation, Water Manipulation (Can create and summon a giant tsunami of poison), Teleportation (Can teleport someone into the path of his fist while fighting), Paper Manipulation (With the Paper Cut Secret Attack), Light Manipulation, Summoning (The Book Eclipse Secret Attack creates a solar eclipse and summons demonic night creatures), Creation (Created a new house for himself), Immortality Negation (Type 4, both the Poison Wave and his book can take away several thousands of lives if not more)

Attack Potency: At least Building level physically (Lifted and dropped "the entire ground" with only his index fingers). Multi-Continent level with Wave of Fire Secret Attack (Created a planet-sized wave of fire)

Speed: Massively Hypersonic+ (Surfed from Massachusetts to England in 7 seconds)

Stamina: Very high (Can fight for hours, battle entire armies, and surf across the ocean without showing the slightest hint of fatigue)

Standard Equipment: Books which can be used to embed in people's heads or decapitate them.

Intelligence: Very high (Book Cop has been alive for several hundreds of years, and a vast majority of that time was spent reading books as well as studying and practicing combat techniques. He is a highly skilled fighter and won the American Revolution almost single-handedly.)

Weaknesses: It is possible that he cannot perform the Wave of Fire Secret Attack if someone sees him crossing and uncrossing his arms.