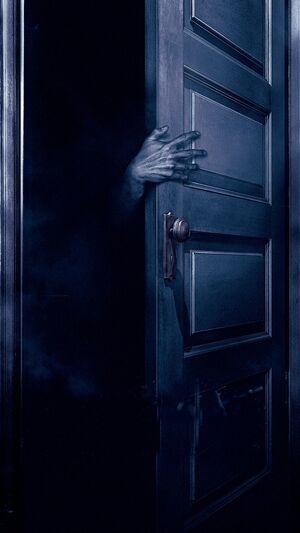 The Boogeyman is the titular main villain of the Boogeyman film series. He is a demon who lives in closets worldwide, which are revealed to be portals to his dark and secret dimension.

The Boogeyman makes a hobby of abducting children and feeds off the fear of those who believe in his existence.

Name: The Boogeyman, Him, Monster

Age: Unknown, at least 111 by the third film

Attack Potency: Wall level (Can effortlessly disembowel people and broke a human in half by pulling them into a chest. Possession lets him bypass conventional durability.)

Speed: Superhuman (Regularly blitzes multiple people, could tightly wrap the upper body of a grown man in plastic within a short timeframe)

Durability: Unknown (Only shown to be harmed by the destruction of objects he composes his physical form of), His Immortality and Incorporeal nature make him difficult to kill.

Weaknesses: Dependent on the fear of others to retain physical form, harming the objects he chooses to manifest this form with will harm him. Seems to enjoy toying with his victims.