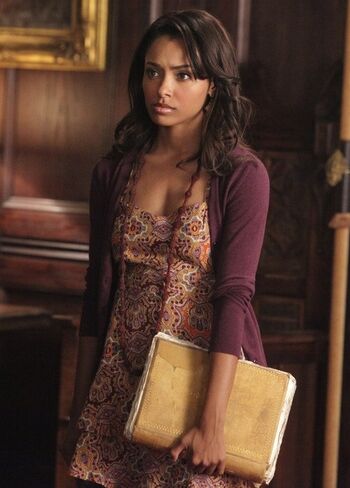 Bonnie Bennett is one of the main characters of The Vampire Diaries, and one of the best friends of protagonist Elena Gilbert. She is a very promising witch with incredible amounts of skill and potential in the magical arts. Over the years she's often served as a moral compass for her friends and the heart of the team. She's also been one of the only ones of the group to get past Damon's selfish bad boy exterior and see the metaphorical "human" deep down inside. Bonnie has proven herself time and time again to be one of the best friends you can have, one of the most valued and effective members of any team, and one hell of an enemy to fear when ticked off.

Powers and Abilities: Telekinesis, Fire Manipulation, Wind Manipulation, Biological Manipulation (Bonnie has been shown able to cause intense aneurysms), Necromancy, Has premonitions of the future and future events, Has an uncanny level of intuition that borders on a form of supernatural awareness (She was shown to be able to navigate Elena's house better than she had and could tell where an item was while Elena looked for it, could sense the numbers of a crime scene of Damon's that hadn't happened yet).

Attack Potency: Human level | Wall level (Can harm and kill vampires and werewolves alike with her powers. Has ripped out vampire's hearts and organs with ease using her telekinesis)

Speed: Normal Human, with Subsonic reaction speed and Attack speed with telekinesis (Has reacted to vampires running at her and running away)

Lifting Strength: Regular Human | Class 1 with powers (Witches have been shown to be able to push cars with their telekinesis)

Range: Standard melee range, tens of meters with her powers

Intelligence: Above Average (Bonnie is straight-A student with high marks from her teachers. In terms of magic though is where her intelligence shines. Bonnie has been shown to be a virtual prodigy when it comes to magic, often learning new spells, hexes, charms, etc. with little practice or in less time than expected. She's been shown able to learn and effectively master complex spells that impress skilled witches who often have decades of experience)

Weaknesses: Standard human weaknesses (Even though she is a witch they possess all weaknesses human do)

Retrieved from "https://vsbattles.fandom.com/wiki/Bonnie_Bennett?oldid=4108233"
Community content is available under CC-BY-SA unless otherwise noted.