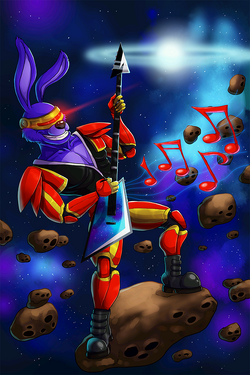 Bonnie is a member of the Faz-Squad space warriors. While Freddy was on a seven month mission, he was brainwashed by LolzHax and used to create a series of monsters before being held in the Cosmic Freeway.

Intelligence: At least Above Average (Is the team's Chief Weapons Officer)

Retrieved from "https://vsbattles.fandom.com/wiki/Bonnie_(Freddy_in_Space_2)?oldid=5963795"
Community content is available under CC-BY-SA unless otherwise noted.