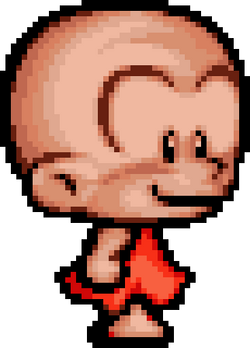 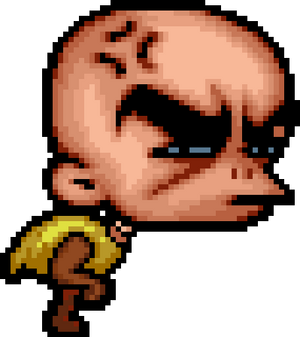 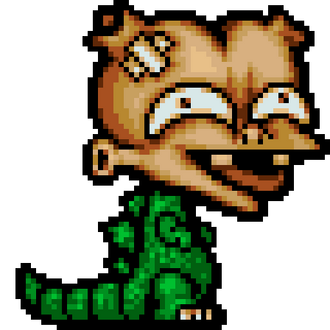 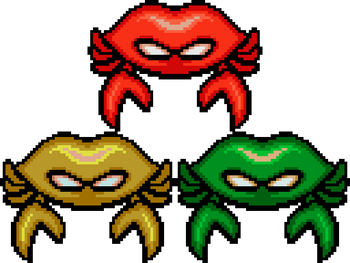 Bonk is the titular main protagonist of the Bonk/B.C. Kid series. His abilities revolve around him using his disproportionately large and thick cranium to attack opponents. He uses those abilities to go on an epic adventure through a wacky version of our own universe, populated largely by dinosaurs.

Age: Unknown, but around that of a child (likely six or younger)

Attack Potency: At least Large Planet level (Can trade blows with opponents who can damage him)

Speed: At least Relativistic+ (Can keep up with opponents who are comparable to Fester Bonk's petrifying light rays in speed), possibly Massively FTL reactions (Could control his flight while being sent flying back to earth from a bionic comet close to the edge of the solar system)

Durability: At least Large Planet level (Survived the destruction of a large bionic comet that was slightly bigger than Jupiter, said explosion had a radius of about 20 times the diameter of the comet, and sent Bonk flying all the way back to Earth from near the edge of the solar system at seemingly warp speed, dodging and potentially colliding with asteroids along the way. Bonk survived this without displaying any notable signs of being harmed.)

Range: Standard melee range, several meters to dozens of meters via shockwaves (depending on his powerup level), a few meters via Fester Bonk's petrifying

Weaknesses: Powerups only last for limited amounts of time

Level 1: Regular Bonk - The base form that Bonk starts out in. He dons red caveman attire.

Level 2: Fester Bonk - The second form of Bonk that is attained by ingesting a single small piece of meat. This form consists of Dragon Ball Z-like eyebrows and yellow caveman attire. His body turns into a flightless bird-like body upon consuming a blue candy. He possesses the same standard head-bonking, gliding, and gliding as regular Bonk, as well as the techniques listed below.

Level 3: Kronk Bonk - Bonk's third and final form. It now has green caveman attire and a very different looking face; heart shaped head, two crescent shaped eyes, a froglike tongue, and fumes seeming to come out of his pores. His body transforms to resemble Godzilla upon eating a blue candy.

Crab Bonk - Bonk turns into a crab whenever he gets squished by something. He can also seemingly do it at will, or whenever he takes significant damage. This form is faster and can attack with its pincers, but aside from that, it possesses nothing unique. The crab can be red, yellow, or green, depending on Bonk's power level.