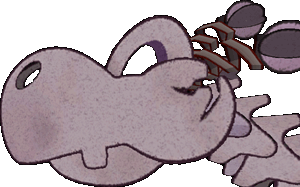 Bonetail is an enemy appearing in Paper Mario: The Thousand-Year Door. It is the elder sibling of Hooktail and Gloomtail, and was once a pet of the Shadow Queen, but died of starvation after being stuck in the bottom of the Pit of 100 Trials.

Gender: Unknown, referred to as either male or female

Attack Potency: Multi-Solar System level (Can harm Mario. Is much stronger than its siblings, as well as the Shadow Queen)

Speed: Massively FTL+ (Can keep up with Mario)

Intelligence: Below Average (Can barely speak, only being able to grunt and roar)

Dangerous Breath: Bonetail shoots a breath attack at the enemy that can freeze them, confuse them, shrink them, and put them to sleep.

Fire Breath: Bonetail shoots a stream of fire from its mouth.

Stomp: Bonetail stomps on Mario or his partners with his foot

Healing: Bonetail heals himself when he is under 100 HP

Retrieved from "https://vsbattles.fandom.com/wiki/Bonetail?oldid=6175492"
Community content is available under CC-BY-SA unless otherwise noted.