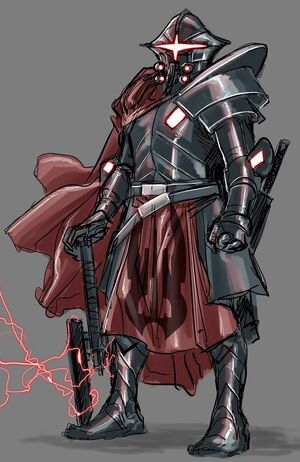 Bombinax was a male humanoid Lieutenant of the Queen of Ktath’atn. Like all her subjects, he was infected with an Abersyn Symbiote and thus under the complete control of the Queen’s hive mind. An imposing figure clad in durable armour, he was also extremely strong and a skilled combatant, actually managing to overpower the Wookiee bounty hunter Black Krrsantan in melee combat. He was eventually defeated and killed by an Abersyn Symbiote possessed Krrsantan.

Classification: Lieutenant of the Queen of Ktath’atn

Speed: Likely Peak Human (Can keep up with a Wookiee; adults and even juveniles of this species display mobility well beyond those of the typical human and can move through tree canopies with such speed & agility that they can put human gymnasts to shame)

Durability: Small Building level (Should be able to withstand the forces of his own physical strikes)

Intelligence: Average to below average. Being a subject of a hive mind, he is not particularly intelligent. Has also shown no tactical acumen and his only strategy for combat appears to be to simply rush at his opponents and beat them to a pulp.

Weaknesses: None notable other than lack of independent thinking/planning capacity.

Retrieved from "https://vsbattles.fandom.com/wiki/Bombinax?oldid=6616639"
Community content is available under CC-BY-SA unless otherwise noted.