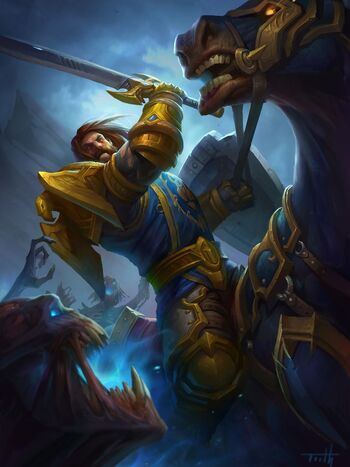 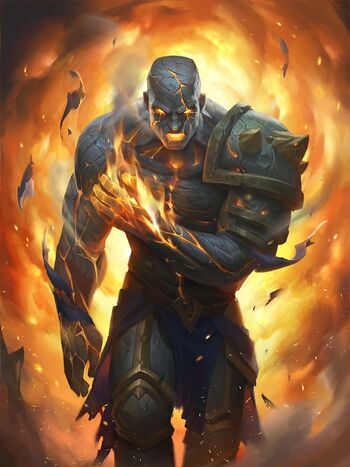 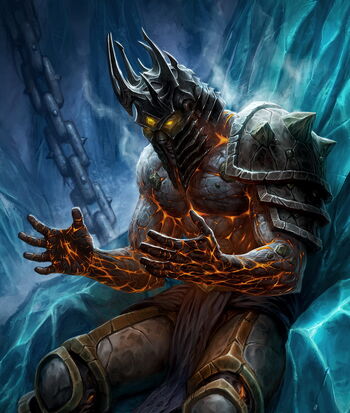 Highlord Bolvar Fordragon was a venerated paladin of the Alliance who had served as the Regent of Stormwind following the disappearance of King Varian Wrynn. Upon Varian's return, Bolvar was named the commander of the Alliance forces sent to take the battle to the Scourge in Northrend. During war against the Scourge at the Wrath Gate, he would be nearly killed by Putress’s plague, but was saved by the red dragonflight. Though, as a result, he would experience heavy injuries in the form of burns across his entire body. Following the defeat of Arthas Menethil, he deemed himself unfit to return to his normal lifestyle and offered to take the next position as the Jailer of the Damned, where he would don the Helm of Domination and restrain the Lich King within the Frozen Throne.

Classification: Paladin, former Regent of Stormwind, Master of Fordragon Hold, Leader of the Valiance Expedition | The Lich King, Jailer of the Damned

Attack Potency: Likely City level (Defeated a majority of the Scourge’s most powerful forces, including Kel'Thuzad. Twice. Fought briefly with Arthas Menethil despite being heavily injured, and is comparable to Tirion Fordring who defeated Arthas) | At least City level (Should be more powerful than previously. Clashed quite evenly with Val'kyr empowered Sylvanus Windrunner)

Stamina: Resisted long moments of horrific torture from the Lich King and could singlehandedly restrain the forces of the Scourge in the place of the Lich King for days on end. Resisted heavy burns on his entire body.

Standard Equipment: His sword and shield | The Helm of Domination

Bolvar, Fireblood in Hearthstone
Add a photo to this gallery

Retrieved from "https://vsbattles.fandom.com/wiki/Bolvar_Fordragon?oldid=5548178"
Community content is available under CC-BY-SA unless otherwise noted.