VS Battles Wiki
Register
Don't have an account?
Sign In
Advertisement
in: Tier 8, Tier 8-C, Tier 2,
and 103 more 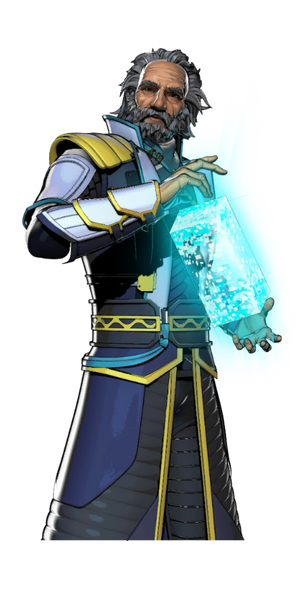 Itu was once the talented disciple of Bolo, the leader of Heralds, who erased his mentor from existence and took his identity in a desperate attempt to escape the torture he was put under by his sensei. Itu was shocked to realize that despite him disagreeing with Bolo's cruel actions, when he replaced him in the timeline he did the exact same crimes against humanity as his mentor did in the past. Not being able to keep on living with knowing who he was before, he used a special device to cause amnesia to himself, so that he would forget anything related to who he was originally. From then on, he's been living his life for a long period of time as the Bolo everyone knew, up until he regained all his blocked memories while helping the shadow bot Nanami achieve her goal.

Itu has been intensely trained by Bolo in Shadow Drill Lessons from a young age, and thus has achieved a part of his powers, gaining all of them the moment he replaced his master. Lots of rumors go around claiming that he is the most dangerous human on Earth.

As Bolo, Itu is prone to being an arrogant person, putting Heralds who oppose his decisions under certain laws to suppress their potential of making him lose profit. In fact, human life often times is of petty importance to him, as he is ready to sacrifice and torture any people to achieve his goals. In spite of this, he is a survivalist, trying his hardest to ensure the safety and survival of the future of his nation of Heralds. He is a tricky old man who doesn't starve for fights because of his age, avoiding direct combat while preferring to use the many Shadow Tricks he holds up his sleeve instead. He is a cunning and charismatic liar, every bargain of his ending up always granting him advantages and boons all the while causing great misfortune to the people who agree on his terms. He sometimes also plays the good guy on his allies only to backstab them later on. Having the face of a troublemaker, some people find him as being a mysterious, dangerous and strange individual, as not much of his past is known to people. He participated in the endeavour of defending the Sphere from harm and using it for the good of all, becoming the Third Arrow - the Arrow of Knowledge -, who would be tasked with researching the Sphere to elevate the Dynasty and Heralds factions to new heights in technology and other scientific fields. He has been trying to prevent the end of the world many times by traveling back in time, but every attempt was futile, making him tired of revolting against the fate of the world.

After the destruction of his world, Itu is now a vagrant, wandering as a foreigner from one alternate plane to another, enduring loneliness, trying to help Descendant's clones in saving the world and at the same time trying to survive due to the mysterious sudden loss of his ability to use some of his powers.

Attack Potency: Building level+ (Fought on par with Shadow's Descendant, who should be at least as powerful as Proximus, who defeated post Shadow Mind fusion Descendant and Shadow in combat). Up to Universe level+ with Shadow Energy (Created a spatio-temporal loop with the use of Shadow Energy)

Lifting Strength: Unknown, likely at least Peak Human (Should be comparable to Descendant, who with little issue can grab and throw opponents that wear heavy steel armor and who also hold an extremely heavy weapon at the same time)

Stamina: High (Can fight up to five rounds against Descendant while sustaining heavy battle wounds such as deep blade wounds to vital areas, powerful blunt attacks that knock him unconscious, impalements, being burned by shadow fire and bleeding heavily before getting tired). Very High, likely Unlimited in Shadow Form (Fought the original Bolo for 30 years without rest while in Shadow Form, and claimed he would fight him eternally)

Range: Extended Melee Range with Nodachi and Hermit Katana. Several meters with Supernova (Folding Blade). Tens of kilometers, up to Interdimensional with Shadow Energy (His clone claims he would not be surprised if Itu could expand the Dome - a Shadow Energy construct - over the Dynasty capital city all on his own. He can open up shadow portals in alternate worlds).

Intelligence: High in the field of combat, Extraordinary Genius in the field of science (Heralds are extremely knowledgeable in Shadow Energy and Shadow-based technologies. Their movements are mathematically precise, quick and deadly, thus even the high and mightiest prefer to avoid direct confrontation with the Heralds. Heralds dedicate their lives to the Study of Shadow Energy. In battle, heralds carefully choose the right moment to strike an accurate and deadly blow. They perfectly see the vulnerabilities of an enemy and know how to use it. Heralds are the most skillful at the use of Shadow Energy. Itu is born with the talent of being a Herald, and as an original Herald and a true master of the Dome, he is superior to Kibo, who neutralized three Liquidators on her own, with Liquidators being soliders trained to fight against those who rely heavily on Shadow Energy. Itu also heavily contributed to the making of the constructs under the Dome. Everything under the Dome is so upgraded to the point where Heralds are far more ahead than Dynasty in terms of technology. This is because Heralds boosted their brains to unprecedented levels with Shadow Energy, allowing them to understand how to change the structure of any material using Shadow Energy. As any early Herald, Itu underwent harsh martial arts training from a young age. He was personally trained by his mentor, the original Bolo, leader of all Heralds, and was the best fighter of the Heralds' martial arts Academy. Itu bested his master in combat, who as one of the Three Arrows is the equal of both Emperor and Galen, both who were also Golden Demons, who are not inferior to Heralds, and whose training program is lifelong. Itu is also an expert in many fields of science such as biology, technology, quantum physics, interspatial travel, time travel, mass paradoxes and reality-altering Shadow Anomalies. His Shadow Energy studies have led him to become the most dangerous man on Earth, as he knows how to use Shadow Energy better than any other human. Even before he boosted his brain with Shadow Energy and was just a shadow blacksmith of the Dynasty, he was able to create the Void Room by trapping a living void in the thinnest walls of Shadow Energy, separating it from space and time in the process. The Void Room itself gave him secret information on time travel. His Rectangle of Dimensions allows him to store an incredible amount of information. His many experiments with time have led him to knowing how to create spacio-temporal loops with Shadow Energy, and giving time itself shape and transforming it into physical matter with said energy. Even in Itu's Plane, a universe that contains technology offered to humans by the Void Room (a hive mind made out of the smartest Herald scientists to have ever lived, and that sees the past, present and future at the same time), he is still able to understand the constructs of this world despite seeing them at a first glance. Is an expert hacker and engineer who can repair Itu's Plane Shadow Bots and hack them into obeying his every order even if they are far more complex than the ones from his world. Nanami, who is a Shadow Bot that is smarter than humans and thinks a hundred times faster than them, considers his intellect impressive for his kind)

Weaknesses: His old age, combined with his muscle pain and the Nodachi's weight, restrict Itu's movements significantly. He cannot move a lot or fight aggressively, and he is unable to run. His Rectangle of Dimensions gets heavily damaged when his timeline is destroyed, causing it to dramatically lose energy and thus his memories. Galen claims Bolo loses his power for a while when he makes his rifts.

These abilities can only be performed by Itu while he is in Shadow Form.

Historical Importance Index is a mechanism in the Shadow Fight world which allows all people to change the course of world history processes with their wishes, thus being able to change the face of the world based on their personality. Because everybody has access to this power, more often than not their wishes will intercept and clash with each other over which one gets to become reality. The winner whose wish will triumph over the one of his adversary is the one who is simply more important to the world than the other. This is why people who are very important will change the fate of the world with their wishes so suddenly they won't even know how they succeeded so easily, because they don't even have to try much, while those who are less important than the previously mentioned won't be able to change the world with their wishes even if they try harder than the more important people to make them reality, their wishes getting completely overwritten by those of the more important individuals. One's historical importance index is as high as how many other lives they impacted, and how dramatically. The higher the index of historical importance of a person is, the more "luck" they get in all their plans, the more of their wishes will come true.

Itu (as Bolo) as the Manager of the Dome

Young Itu as a Shadow Master