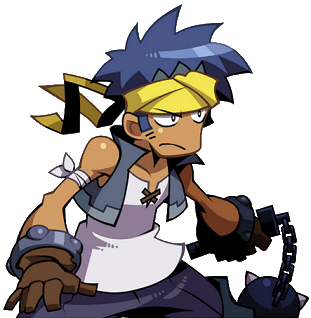 Bolo is a supporting character of the Shantae series. This young and hot-headed warrior is Shantae's friend and sparring partner. He was the one to teach her, some of her fighting moves. Bolo is described by Shantae as a "block-head hero for hire", he springs to life when he has occasion to fight, however, he is often left behind by the main protagonist. While not being too bright, Bolo possesses incredible determination and will to fight. He has a weakness for older women and can be deceived by them rather easily (which was proven when Risky seduced him and then knocked him off)

Intelligence: Below Average. It's been noted many times that Bolo is straight up dumb. He's really easy to manipulate and is difficult to train as he fumbles constantly. However, he does possess a high level of combat experience, (Teaching Shantae some hand-to-hand combat techniques), and cooperates well with teammates (In Friends to The End) to take down his opponents. He's also stupid in an unpredictable way, allowing him to take advantage of opponents expecting him to fight in a logical manner.

Weaknesses: Can be easily deceived by older women or controlled by a mastermind.