VS Battles Wiki
Register
Don't have an account?
Sign In
in: Characters, Absorption Users, Abstract Entities,
and 55 more 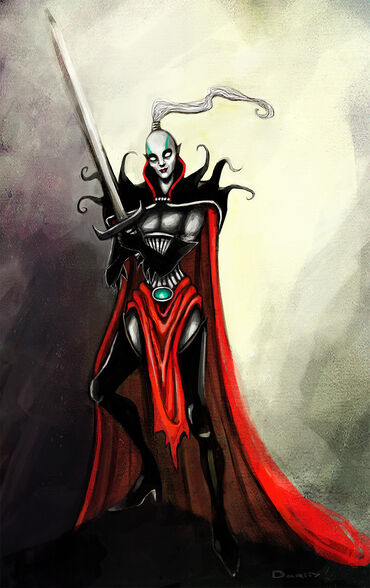 Boethiah is the Daedric Prince of Deceit and Conspiracy, whose sphere encompasses the secret plots of murder, assassination, treason, and unlawful overthrow of authority. Appropriately refereed to as 'The Prince of Plots', Boethiah is among the most overtly active Lords of Oblivion, and is known to directly interact with their mortal followers, appearing in both male and female guises. They are cruel, sadistic, and inherently destructive, yet nevertheless worshiped by numerous cults throughout Tamriel.

However, as a being who values the strength of individual will above all else, Boethiah is displeased and disgusted with their followers, seeing their devotion and submission as weaknesses. As such, Boethiah's true faithful worship the Daedric Prince not through the piety of their words, but by the blood on their swords. Boethiah rules over the Olivion Plane of Attribution's Share, a realm of labyrinthine policy and betrayals, filled of stormy skies, volcanic islands, twisted towers and seas of lavas, bloody tournaments and death-matches are endlessly held for the Prince's amusement.

As a result of their violent and bloodthirsty nature, Boethiah is seen by the cultures of Tamriel almost unanimously as a malevolent force, with the sole exception being the Dark Elves of Morrowind, who attribute great cultural and historical importance to the Prince of Plots. With the Prophet Veloth as their herald, Boethiah is seen as the original god-ancestor of the Dunmer, who in the Merethic Era brought them enlightenment with the truth of Lorkhan's sacrifice, defeating the false Aldmeri Champion Trinimac and teaching them the ways of the Psijic Endeavor, and as such established the fundamental beginnings of Dunmeri culture.

Name: Boethiah (Also spelled Boethia). Known by many titles, such as The Lord and Prince of Plots, The Dark Warrior, The Anticipation of Almalexia, The Deceiver of Nations, The Queen of Shadows, The Goddess of Destruction, The Devourer of Trinimac, He-Who-Destroys, She-Who-Erases, etc.

Gender: Inapplicable. Depicted and referred to as both male and female.

Powers and Abilities: Superhuman Physical Characteristics, Higher-Dimensional Existence (Daedra are described as living conglomerations of hyper-angles, and as being entities of higher-dimensional morphology beyond what mortals can perceive), Large Size (Type 10), Immortality (Types 1, 2, 3, 5, 8 and 9), Abstract Existence (Type 1), Acausality (Type 5. Gods and Daedra are eternal and immutable entities who only seem to be linear and bound by cause and consequence because they choose to appear as so), Regeneration (High-Godly. Comparable to other Daedric Princes such as Azura, who reformed after being completely destroyed and erased by Vivec after he had tapped into CHIM), Magic, Reality Warping, Time Manipulation, Causality Manipulation, Conceptual Manipulation (Type 1. Immensely above the Ideal Masters, who exist as, and control their own Platonic Ideal beyond the limitations of Nirn. Embodies and predates the creation of the concepts of deceit, conspiracy, treachery and sedition), Mind Manipulation, Higher-Dimensional Manipulation (The Daedric Princes, and even Demiprinces such as Fa-Nuit-Hen, can freely shape the structure of their realms on a whim, even altering their number of Spatial and Temporal Dimensions at will, either making them friendly and appealing for mortals or manipulating them into incomprehensible landscapes), Physics Manipulation (The physical properties of any plane of Oblivion are entirely dependent on their Prince's whims), Law Manipulation (Similarly, the laws of Attribution's Share are entirely dependent on Boethiah's will), Dimension Absorption, Telepathy, Telekinesis, Teleportation, Summoning, Spatial Manipulation, Time Manipulation, BFR, Precognition, Transmutation, Matter Manipulation, Avatar Creation, Incorporeality, Soul Manipulation, Sound Manipulation (Can manipulate the underlying tones of existence and change reality accordingly), Cosmic Awareness, Resistance to Law Manipulation, Soul Manipulation, Curse Manipulation, Dimension Absorption, Spatial Manipulation, Physics Manipulation, BFR, Transmutation, Madness Manipulation, Mind Manipulation, Magic, Reality Warping, Time Manipulation and Conceptual Manipulation

Attack Potency: High Hyperverse level (As a Daedric Prince, Boethiah is one of the primary Ada that fundamentally maintain and comprise the infinitely-dimensioned Void of Oblivion, holding absolute domain over and personifying one of the sixteen partitions that make up the entirety of the realm and represent the empty spaces behind the spokes of the Wheel of the Mundus)

Range: High Hyperversal (Can freely traverse through Oblivion, an infinite-dimensional void which encompasses all possibility and contains an endless number of individual daedric realms)

A statue of Boethiah in Skyrim 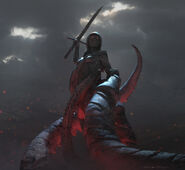 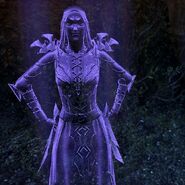 Aspera the Forgotten, an avatar of Boethiah