VS Battles Wiki
Register
Don't have an account?
Sign In
Advertisement
in: Tier 4, Tier High 4-C, Tier 2,
and 75 more 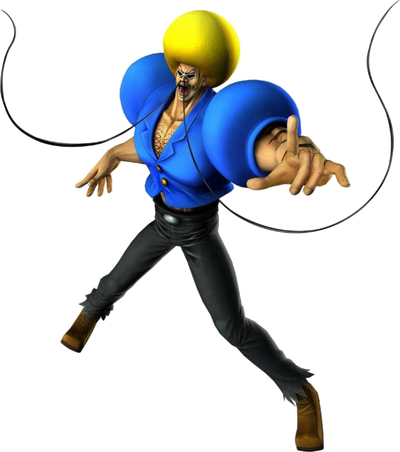 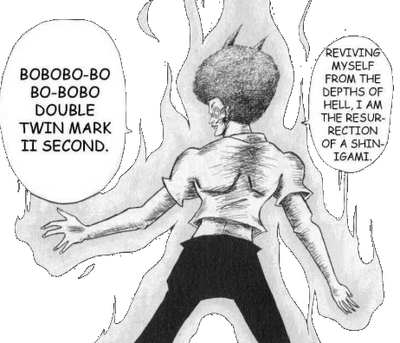 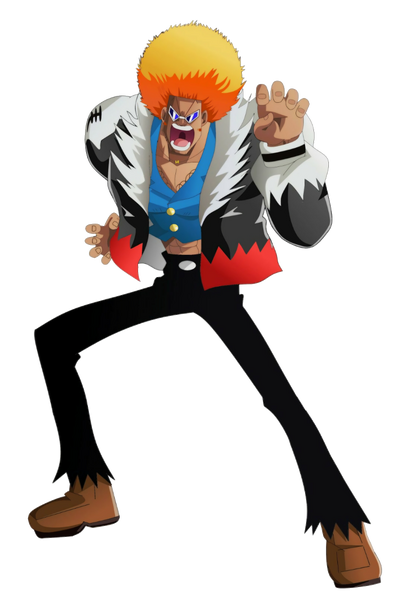 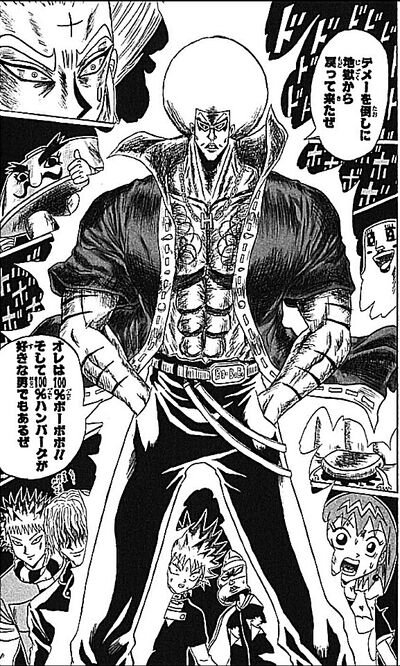 Bobobo-bo • Bo-bobo is the primary protagonist of the satirical action-adventure manga of the same name. Born in the Hair Kingdom with a father who is both a follicle of hair and a sword, he pursued training in the art of the Hanage Shinken, or True Fist of the Nosehair, in his early years, which has become his signature style.

It is unknown when he had begun to pursue this philosophy of Hajike, but he likely did that as a child, too, seeing as two of his childhood friends and his older sister also became Hajikelists. Regardless of when he started, he gained the title of Hajike King throughout the story, revered by Hajikelists all throughout the world and even in the after-death.

His main goals at the start of the story involved taking out as many Hair Hunters from the Maruhage Empire as he could, and he didn't want anyone to be forced to be bald. Throughout the series, he gained many friends, who, along with him, would eventually be known as the Nonsense Nine.

Powers and Abilities: Superhuman Physical Characteristics, Immortality (Types 1, 3, 7, and 8. Hair Ball users should be capable of living forever and boasting no lifespan, along with being able to lose their whole body, mind, and soul, and still be alive. Bo-bobo has killed the Demon King and everyone in Hell, and can come back from any afterlife. Bo-bobo has been both a vampire and a zombie before, and his Type 8 is due to being reliant on his Hair Soul, which can survive even if his body, mind, and soul are completely erased), Martial Arts, Weapon Mastery (Many random weapons used), Flight, Reality Warping, Fire Manipulation, Shapeshifting, Summoning, Toon Force, Plot Manipulation (Has control over his own series and can determine the course of events using this), Time Travel (Was in a story that occurred over a thousand years ago), Resurrection (Has come back to life by himself multiple times), Regeneration (Mid-High. Regenerated from a pile of dust. Regenerated multiple times from a pile of liquid) Pocket Reality Manipulation, Death Manipulation, Soul Manipulation (Can attack and destroy souls as well as destroy beings in the afterlife), Law Manipulation (In Bo-bobo World), Conceptual Manipulation (Type 3. Was able to hit Giga, who could only be hit by conceptually artistic attacks by attacking him with the "concept of aesthetic" that exists within everyday reality), Power Nullification, If killed he can fight his way back to life through hell, Aura, Energy Manipulation, Mathematics Manipulation (Made it so that 3 + 3 = 8) Energy Projection, Psychometry, Statistics Amplification, Afterimage Creation, Cloning, Teleportation, Transmutation (Turned Don Patch into Ice Cream. Turned Beauty into a doll), Size Manipulation, Information Analysis, Darkness Manipulation, Spatial Manipulation (When changing from day to night, he literally carried the space and stars with him), Creation, Can make fire go out by telling it to, Hellfire Manipulation, Telepathy, Weather Manipulation, Invisibility, Chi Manipulation, Water Manipulation, Electricity Manipulation, Magma Manipulation, Telekinesis, Wind Manipulation, Probability Manipulation, Earth Manipulation, Curse Manipulation, Ice Manipulation, Life Manipulation (Has created living things), Willpower Manipulation (Filled Despair-kun with hope), Technology Manipulation, Resistance to Petrification (Maiteru's petrification turned him into a vegetable instead of a statue, and he was able to fight regularly), Wind Manipulation (Was able to easily fight in Geha's tornado and was unaffected by his attacks), Paralysis Inducement (Hatenko's Lock technique normally locks people for a day, and it only locked Bo-bobo for a few seconds), Mind Control (He shook off mind control after a few scenes of being controlled), Sealing (When the Kill Seals were put on Bo-bobo's team, they just peeled them off), Dream Manipulation (When Nightmare used Death Nightmare to make Bo-bobo's nightmares a reality, it instead used a dream that Bo-bobo knew nothing about), Transmutation (Giga's Objet D'art Shinken didn't turn him into clay when he tried), Possession (When Giga used Giga Sound, Bo-bobo sat in a throne and told Giga to bow down to him), Fourth Wall Awareness, Instinctive Precognition | All previous powers, Durability Negation, Heat Manipulation and Resistance (Is hotter than the core of the Sun, and ignores all resistances to heat when attacking), Can memorize attacks after seeing them once. | All of the powers of his base form, Mind Manipulation (Look Look Hello There), Danmaku, Portal Creation, BFR, Magma Manipulation (Bo-bobo Eruption), Space-Time Creation, Empathic Manipulation (Bo-bobo World Nightmare, Ganeme), Weather Manipulation, Attack Reflection (Absorbed the power from Nenchaku's tape and threw it back one hundredfold), Limited Reactive Power Level, Memory Manipulation, Power Nullification, Non- Physical Interaction (Can hit intangible beings), Resistance to Sleep Manipulation (Has an alarm clock in his head), Existence Erasure (Black Magic Cloth failed to work on him), Mind, Soul, and Information Manipulation (When his rationality, soul, and common sense were completely destroyed, it didn't hinder him at all), Absorption (When absorbed by Tsuru Tsururina III, he was still in tact), Bone Manipulation (Yami's Bone Crest failed to work on him) | All previous abilities boosted, Sealing, Space-Time Manipulation, Law Manipulation, Resistance to Sealing and BFR | All previous abilities boosted, Absorption (Can now absorb Hajike, the life force and "death force", and souls of beings with the Landmine Ball),

Attack Potency: At least Large Star level (Is able to hurt the Three Civilizations who could take attacks from Bobopatchnosuke before Majide Time. Moved a background full of stars across the sky when turning it to night time. Funny Sugoroku is a pocket reality made by Bo-bobo that had a background full of stars) | At least Large Star level | Low Multiverse level (The Super Bo-bobo power-up was described as being infinite. Has created several "super-dimensional" worlds. Hatenko stated the worlds he creates are infinite, ) | At least Low Multiverse level (Bo-bobo became infinitely more powerful during the battle with the Bi-bibi Dokkyun Suicide Corp due to his Bo-bobo Monster House technique. He went on to further fight even more powerful opponents like Shigeki X, who should've been more powerful than Wandering Tofu, who was even infinitely more powerful than other opponents Bo-bobo fought after the Dokkyun Suicide Corp. Should be more powerful than Don Patch who became an inescapable, extra-dimensional, eternal story.) | At least Low Multiverse level, likely Far higher (He easily destroyed an attack of Bibibi-bi Bi-bibi's Kegari Shinken by glancing at it, specifying that he didn't even have to remove his hands from his pockets. He eventually defeated him without effort, and even spammed attacks infinitely more powerful than what Bi-bibi was capable of, effortlessly.)

Stamina: Very high, likely limitless. Can fight for many hours at a time, and he even killed everyone in Hell in a few panels, while in the heat of Hell. Once fought Gunkan for three days and three nights. His fight with Halekulani lasted a week. He has never slept since the start of the series and has an alarm clock keeping him awake, making it to where he can't fall asleep even by force. The concept of him being fatigued is a concept so bizarre to Beauty that she thinks even a drawing of Bo-bobo being tired is completely absurd.

Intelligence: Surprisingly an extraordinary genius. Once turned Don Patch into a cyborg after operating on him for 30 minutes with a fork and a few other random materials. Has much experience, and has shown many times to improvise ways to implement the opponents' weakness to defeat them in the heat of battle. Has multiple networks of information inside of his head. He once, in the midst of battle, using several billion dollars, put it into an ATM, sending it to a company that he made as he sent the money to it. The money caused the company to grow, and he knew the company would expand after inflating it, and within seconds, a skyscraper shot up into the floating battlefield from below. He built capable rockets as a child. He has decades of combat experience, ranging from being a mech and fighting in space as a baby to taking out everyone in hell. However, he lacks common sense.

Discord (My Little Pony) Discord's Profile (Speed was equalized, and the battle took place in Ponyville)

Popeye (Popeye (Verse)) Popeye's Profile (Both High 4-C [Popeye with Spinach effect vs Seal Release]. Popeye has prior knowledge and is bloodlusted. Bobobo-bo Bo-bobo is in-character and does not have prior knowledge. Speed equalized. They start 23 apart from each other. Battle takes place at the all-you-can-eat restaurant where Shaggy Rogers fought that biker gang. Win via Incap Only)