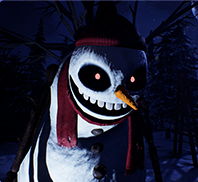 Bobbles is a member of the snowman species that appears in the game Frosty Nights.

Age: Unknown, 100 to 1000+ presumably (Have been making presents for Santa for years and years)

Powers and Abilities: Peak Human Physical Characteristics possibly Superhuman Physical Characteristics, Self-Sustenance (Types 1, 2, and 3), Stealth Mastery (Can easily sneak into a child's room, as well as getting into family's houses without being noticed), Small Size (Type 1), Natural Weaponry (Sharp claws and teeth), Technology Manipulation (Can cause electric toys to activate, and can manipulate the electric lights in the player's room), Inorganic Physiology (Type 1), Regeneration (Mid-High; Regenerate from being fully evaporated), Teleportation (When evaporated they tend to teleport a distance away, and can appear in a child's closet without explanation), Magic (Used when making toys. Were created from magic and much of their abilities likely stem from this), Immortality (Types 1, 2, and 3 possibly 8), Weather Manipulation (Can cause massive blizzards), Resistance to Pain (Seemingly lack the ability to feel pain) and possibly Mind Manipulation (Due to his mind being seemingly directly under the control and power of Mother Nature, he doesn't really control his actions directly, meaning an opponents mind manipulation would have to contend with and overpower Mother Nature's control)

Attack Potency: Street level+ (Can easily overpower and kill a child. Comparable to the Snowman that snapped John's neck. Teeth and claws should be this level), possibly Wall level (The snapping neck could also have been the snowmen ripping the child's head off or even crushing his skull, as the feat is rather vague)

Speed: Athletic Human (Can easily blitz a child given enough the chance)

Lifting Strength: Athletic Human, possibly Class 5 (Comparable to a snowman who casually snapped a child's neck, possibly even ripping the child's head off)

Stamina: High (Weren't fatigued in the slighted when making toys for Santa every day till Christmas. Attack the player all night with no sign of being tired)

Weaknesses: Heat can easily melt him, but since they quickly regenerate from that, it can easily be overcome. The sun can seemingly keeps him from being active.

Retrieved from "https://vsbattles.fandom.com/wiki/Bobbles?oldid=5755885"
Community content is available under CC-BY-SA unless otherwise noted.