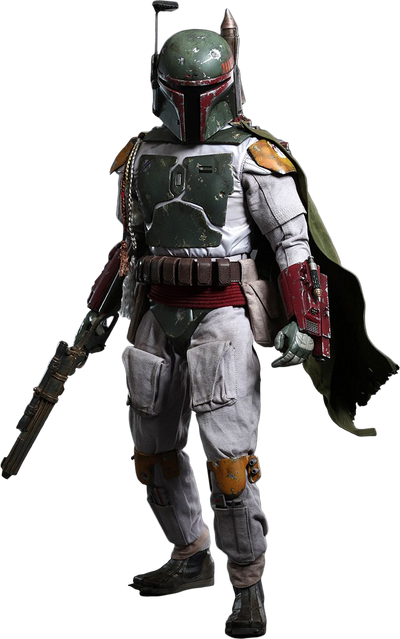 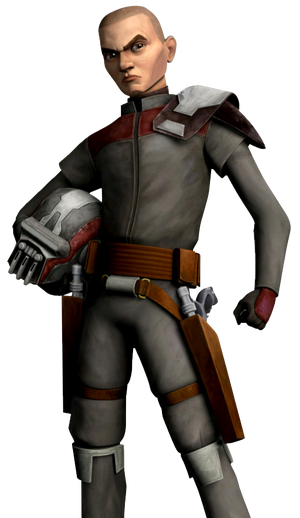 Boba Fett is a human with Mandalorian armor and a bounty hunter. He is a clone of the famed Jango Fett and became a bounty hunter after the death of his father at the hands of Mace Windu. He would try and take his revenge on Windu but would ultimately fail. During the Empire's rule, he would often work very closely with Darth Vader and Jabba the Hutt and would even bring the famed Han Solo in carbonite to Jabba.

In the Legends continuity he was a Mandalorian, and after he fall into the Sarlacc Pit Boba would escape it to later lead the Mandalorians through the Yuuzhan Vong War and would even train Jaina Solo to be able to kill her brother Darth Caedus.

Tier: 9-B physically, 9-A with his blasters, High 8-C with heavy weapons and explosives | 8-A

Classification: Clone of Jango Fett, Bounty Hunter, Mandalorian (possibly, sources state he's a human with Mandalorian armor, while The Mandalorian states Jango was a Foundling, and thus Boba would be by extension) | As before but he's a Mandalorian

Attack Potency: Wall level physically (Should be at least comparable to Dengar. Capable of knocking out Kage Warriors, who are capable of matching Dengar in hand to hand combat. Kicked a solid metal door so hard that it was bent out of shape and flew right off its hinges. Ripped off a large alien's arm [said arm being thicker than Fett's own legs]. Should be at least as strong as an old and sickly Nakano Lash who was strong enough to pin down and snap the neck of a Thisspiasian bounty hunter whose tail strikes could crack and shatter a solid stone floor; Nakano even feared Boba as well. Easily shattered Stormtrooper armour). Small Building level with his blasters (His WESTAR-34 pistols, being heavy blaster pistols, should be this powerful. His EE-3 blaster carbine is more powerful than the standard E-11 blaster carbine favoured by the Stormtrooper Corps and should be overall slightly more powerful than this. A single shot on the highest power setting can vaporize an adult human and reduce them to a pile of "greasy ash" enough to fit in a small jar, a feat which requires roughly 300 Megajoules). Large Building Level+ with heavy weapons and explosives (Is known to make use of Class-A Thermal Detonators and the rockets fired by his jetpack are even more powerful) | Multi-City Block level+ (Capable of damaging Darth Vader's armor, albeit slightly, though Vader wasn't going all out. Can match holding-back Jedi Masters. Although there is no set amount of power nor durability for a being to be a Jedi, the most notable ones Jango fought far surpass him in those categories)

Lifting Strength: Peak Human (Lifted a Stormtrooper with one arm) | Class 5 (Comparable to his father)

Striking Strength: Wall Class (Should be comparable to Dengar, who has punched an injured Chewbacca right through a wall) | Multi-City Block Class+ (Can match a Darth Vader, who wasn't at full power)

Durability: Wall level himself (Can take numerous blow from Kage Warriors, who themselves are comparable to Dengar and can match him in hand to hand combat. Should be at least as durable as old and sick Nakano Lash, who was completely fine after taking a tail strike from a Thisspiasian that was strong enough to crack and shatter a solid stone floor), Large Building level+ with his armour (Survived a Class-A Thermal Detonator explosion at close range with no notable damage. His armour is made of Durasteel and Beskar, the former being the same kind used in the armour of Darth Vader and on the AT-DP walker, and latter being is even stronger, although the durability of this metals depends on the thickness of the materials made from them. His armour should be no less durable than that of Dengar) | At least Multi-City Block level+ with his armor (Its material, Duraplast, is more durable than Durasteel, which is the material used for the Star Forge Assault Droids)

Standard Equipment: Fett wore a set of customized Mandalorian armour (made of both Beskar and Durasteel) equipped with a jetpack, ZX miniature flame projector and fibercord whip (which was capable of holding Chewbacca). He also used a wrist gauntlet laser, EE-3 Carbine Rifle, Tenloss DXR-6 disruptor rifle, a mini concussion rocket on his left wrist, Type-12A anti-personnel rockets, Type-12B stun rockets, 1126 rockets and had a Sacros K-11 blaster pistol. He also had a Concussion Grenade launcher | As before and a lightsaber stolen from a Jedi.

Intelligence: Very high. Boba Fett is a highly talented and extremely dangerous combatant. He was trained from birth by his father, himself one of the most dangerous warriors in the entire galaxy, and was already highly capable as a martial artist and with all sorts of weapons by the mere age of 10. By the age of 13, he was already at least as skilled as a fully mature Clone Trooper of the Grand Army of the Republic, widely regarded as some of the greatest soldiers in the galaxy, and was as skilled a pilot as Clone Aces of the Republic Navy. He was also intelligent enough to lead and manage his own bounty hunters' syndicate, which included such names as Dengar, Bossk, Embo, and C-21 Highsinger.

Weaknesses: None notable | The area of his legs is not protected by his armor

Retrieved from "https://vsbattles.fandom.com/wiki/Boba_Fett?oldid=7057955"
Community content is available under CC-BY-SA unless otherwise noted.