VS Battles Wiki
Register
Don't have an account?
Sign In
Advertisement
in: Tier 6, Tier 6-C, Digimon,
and 37 more 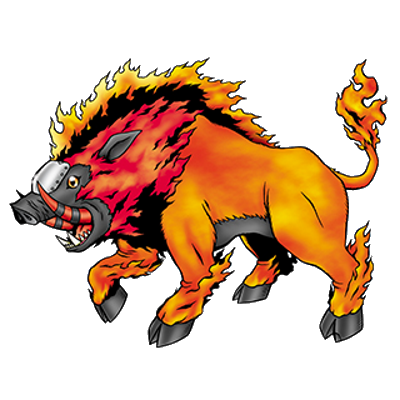 Boarmon is an Armor-level Mammal Digimon that evolved through the power of the "Digimental of Courage". "Reckless"; it is a Digimon that exists solely to embody this word, and its legs, tail and mane are shrouded in blazing flames. No one can stop a Boarmon stampede, and according to one theory, it is said that the program that governs Boarmon's thinking has no concept of "turning". Because the "Totsugeki Hitai-ate", made of Chrome Digizoid, is attached to its brow, all obstacles that lie ahead of it are completely smashed.

Attack Potency: Island level (Equal to if not superior to Folder Continent Meramon)

Speed: Massively Hypersonic+ (Superior to Rookie Digimon and should be comparable to Wizardmon) with Relativistic reactions (Champion level Digimon should be able to move and react to Takumi Aiba)

Weaknesses: Cannot turn as its mind legitimately lacks the concept of turning