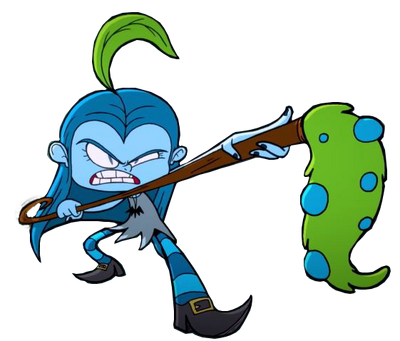 Bluehilda is a Boohilda witch who lives in a forest with her caretaker Boris and pet companion Francis.

Boohildas are witches who use their black magic to perform pranks on people. However, they eventually die and can no longer spread their mischief. A cult known as the Brown Cowels sought to rectify this by bringing the Boohilda's back to life using several magical ingredients, including a Boohilda Wart.

However, one idiotic Brown Cowel mistook a blueberry for a wart, blended the ingredients together, and the result was not a Boohilda but rather Bluehilda.

Attack Potency: Street level (Broke off a large branch of a tree)

Stamina: High (Searched a whole forest for Francis and doesn't get winded from injuries)

Range: Extended melee range with her Shrubstick, Several meters with her magic

Weaknesses: Is quite naive, as she didn't figure out at first that Witch hunters were trying to kill her and Francis, thinking they were just "Furries". Doesn't have much combat experience.

Retrieved from "https://vsbattles.fandom.com/wiki/Bluehilda?oldid=5464607"
Community content is available under CC-BY-SA unless otherwise noted.