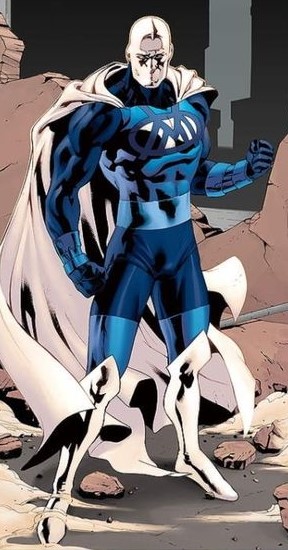 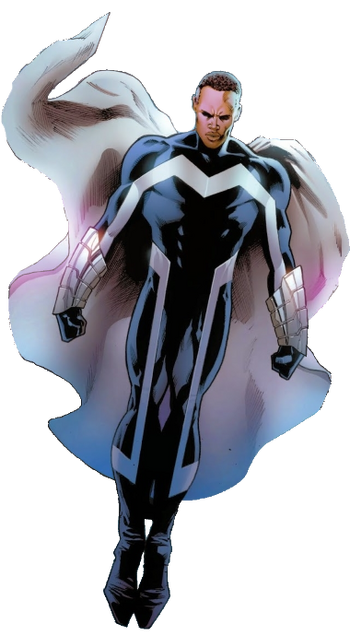 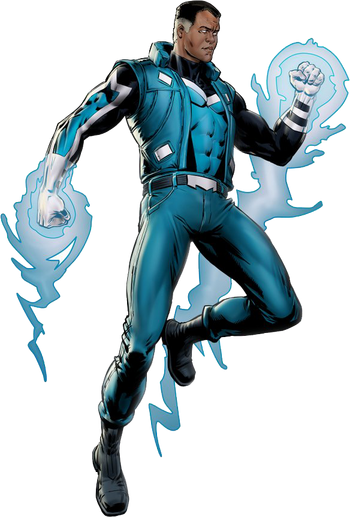 A brilliant scientist and Korean War veteran transformed into a living anti-matter reactor in a lab accident, Adam Brashear became the Blue Marvel, one of Earth's greatest and most respected heroes. Fighting crime for years, his mask was torn off in a heated battle in 1962, revealing to the world that he was African-American; the President soon afterward awarded him the Medal of Freedom and asked him to retire, current racial tensions spurred to even greater heights by the knowledge of a black super-man. Grudgingly conceding, he continued on adventures to the four corners of the Earth in secret for decades, defending it against numerous super-scientific and mystical threats such as the Technocracy, the Deathwalkers, the Atomic Skeletons of Paris and Doctor Skorpion, before being drawn out of retirement to aid the Avengers against the return of his old friend-turned-enemy Anti-Man. Returned to regular duty, he continues to defend the Earth with distinction, both on his own and in teams such as Luke Cage's Mighty Avengers and the Ultimates.

Powers and Abilities: Superhuman Physical Characteristics, Enhanced Senses (Telescopic Vision, Microscopic Vision, Super Hearing), Skilled Hand-to-Hand Combatant (He has been trained by the US Marines in armed and unarmed combat), Flight, Energy Manipulation and Absorption (His powers work by absorbing the antimatter generated by his own body), Antimatter Manipulation, Matter Manipulation (Can create photons from scratch and convert his own antimatter into regular matter), Light Manipulation, Forcefield Creation, Longevity, Regeneration, Self-Sustenance (Types 1, 2 & 3), Resistance to Mind Manipulation (Resisted Lichidus' attempts to take over his mind)

Lifting Strength: At least Class P (Said to have physically diverted a meteor the size of Arkansas)

Stamina: Unknown, but can survive without sleep or oxygen

Standard Equipment: Access to portal technology based in his undersea fortress, as well as an armored "Exploration Suit" enabling him to briefly traverse the Neutral Zone (with a helmet capable of telepathically transcribing his thoughts during the experience)

Intelligence: Extraordinary Genius. Possesses a PhD in Theoretical Physics from Cornell, taught physics at the University of Maryland. Developed advanced portal technology and a gateway to the "Neutral Zone". Simulations done by Richards portray him as being victorious over Doctor Doom 3 out of 5 times in chess

Weaknesses: The unstable matter/anti-matter element Neutronium is capable of harming him, likely vulnerable to magic