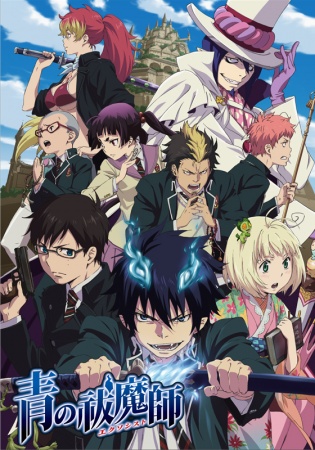 Blue Exorcist centers around Rin Okumura, a troubled youth who was taken in by the local priest, Father Shirou Fujimoto, as an infant. After yet another day of picking fights with the local gangs, Rin begins to see strange black specks in the air that no one else seems to pay mind to. Subsequently, Reiji Shiratori one of the boys Rin fought the night, suddenly reappears with horns growing atop his head that no one else can see. A brawl breaks out between the two of them, but Rin suddenly bursts into strange blue flames when threatened with a knife, much to the latter's shock.

Shiratori then reveals these blue flames to be a mark of Satan's lineage, beckoning Rin to come to Gehenna with him, only for Father Fujimoto to intervene and subsequently exorcise Shiratori. Rin, bewildered at the situation before him and the revelation that he is son of the most reviled demon of all, snaps at Fujimoto, causing the latter's mental defenses to fall and Satan to possess him. Left with little other choice, Rin draws the blade that sealed his demonic lineage, burning away the gate to Gehenna. But it was already too late for Fujimoto, who killed himself in order to prevent Satan from dragging Rin to hell.

After Fujimoto's funeral, Rin is confronted by Sir Mephisto Pheles, who claims to be a friend of the late father. Pheles was asked to offer Rin protection, but instead decides to attempt to kill Rin as a precaution against Satan's return, giving the teen the choice to let himself be killed, commit suicide, or commit murder and flee. Disgusted with the idea that Fujimoto's death would come to nothing, he instead demands to join Pheles' True Cross Order and become an exorcist to defeat Satan. Taken aback and amused by the notion of a son of Satan becoming an exorcist, Pheles arranges for Rin to attend True Cross Academy, beginning Rin's long and arduous journey towards becoming an exorcist powerful enough to defeat the god of demons.

Blue Exorcist has only a handful of destructive feats and very few speed feats, topping out around Town level with Supersonic speed. However, the verse possesses a number of interesting mechanics that allow it to stand out from others in its weight class, such as Rin's soul-destroying blue flames and the conceptual existence of the most powerful demons in Gehenna.