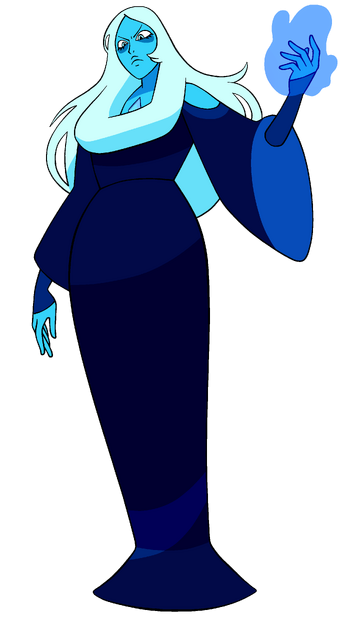 "Blue Diamond" is one of the Four Diamonds that rule Home World, and is usually accompanied by her ward Blue Pearl. Like her fellow Diamonds, she is tall, intimidating and implied to be immensely powerful. She was the supervisor of the Earth Colonization project before the project was abandoned due to the Crystal Gems' rebellion, taking the demise of Pink Diamond hard as she secretly made regular visits to the site of her fellow Diamond's death. Blue Diamond is also the cause of Garnet joining the Crystal Gems, having condemned the fusion when first formed by accident.

Gender: Genderless, but regarded as female

Powers and Abilities: Superhuman Physical Characteristics, Gem Physiology (Grants Regeneration (High-Mid), Immortality (Types 1 and 3), Shapeshifting, Size Manipulation, Body Control, Biological Manipulation, Fusionism, Self-Sustenance (Types 1, 2, and 3), Automatic-adjustment to different strengths of gravity, Pocket Reality Manipulation (All Gems have a pocket dimension of infinite size contained within their gemstone), Sealing (Via Bubbles), and BFR (Via Bubbles)), Large Size (Type 1), Empathic Manipulation (Can project her emotions onto others), Aura (Allows her to detect and harm entities on the astral plane), Danmaku, Energy Projection, Corruption (When combined with White and Yellow she is able to corrupt an entire planet's worth of Gems), Resistance to Empathic Manipulation, Telepathy (Steven struggled to get near her in his Astral Projection form due to their aura), and Gem Destabilization (Resisted Yellow's electricity, which destabilizes a gem's form)

Attack Potency: At least Multi-Continent level, likely higher (Exchanged blows with Yellow Diamond. Casually snapped Lapis Lazuli's water chains, which were durable enough to restrain Malachite. It's implied that the Diamonds are much more powerful by regular Gems by an unknown degree. Additionally, WoG implies that Diamonds have never been "poofed" before, which may imply that no known Gem has matched their might.)

Speed: Relativistic in Combat Speed, Reactions and Short Burst (Should be at least comparable to Gems like Jasper, Garnet, and Rose Quartz), FTL Attack Speed (Capable of attacking this fast)

Durability: At least Multi-Continent level, likely higher (A combined attack from Steven, Garnet, Amethyst, Pearl, Bismuth, Peridot, Lapis Lazuli, and Lion did nothing but annoy her. Took a sustained direct attack from Yellow for several seconds without poofing)

Stamina: Limitless so long as her gem isn't damaged or destroyed

Intelligence: Should be high as she is the ruling Matriarch of Home World and oversaw the Earth Colonization project

Weaknesses: Emotionally sensitive, Sufficient damage to her physical form can revert her back to her vulnerable gem form which can be broken and destroyed. Her powers are less effective on something like a human (Connie wasn’t affected the first time, but the second time) or anything experiencing worse emotions than her (although Lapis Lazuli was affected by it, it didn’t take much of a toll on her) and are seemingly ineffective on non-human animals (Lion was unaffected by her wave).