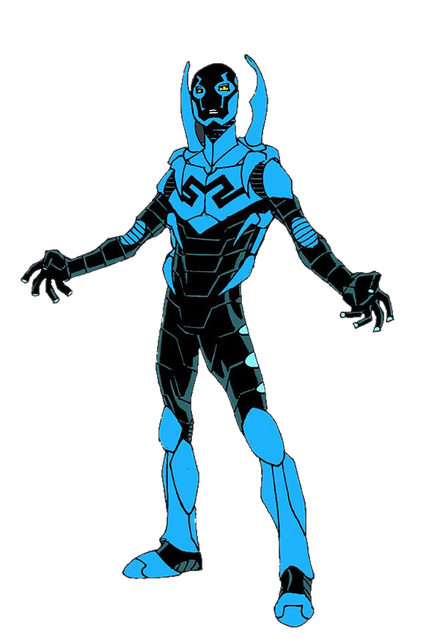 Jaime Reyes is the third Blue Beetle, successor to Dan Garrett and Ted Kord. Using the alien Blue Beetle Scarab, he manifests a weaponized exo-skeleton to become a teenage super-hero. Growing up in El Paso, Texas he is a Mexican-American; his two best friends Brenda and Paco assist him as a crime-fighter. He has been a member of the Justice League International, the Posse and the Teen Titans. Jaime Reyes was created by Keith Giffen, John Rogers and Cully Hamner, first appearing in Infinite Crisis.

Powers and Abilities: Superhuman Physical Characteristics, Regeneration (Low-Mid, regenerated from a gunshot to the head), Shapeshifting, Information Analysis (A inexperienced Jaime accidentally gains a readout of a good portion of the town. The Scarab can see the location and track any person Jaime has met since they bonded, even if they are cloaked. The Scarab probes the Phantom Stranger against his will. Easily analyzes Dani Garrett’s ancestry, state of health, and threat level, which was implied to have been based on her knowledge), Technology Manipulation, Hacking, Energy Manipulation and Absorption (Drained the energy from The Bottom Feeder. Overpowered Livewire’s drain with his own), Reactive Evolution and Adaptation (Reach Infiltrators are constantly evolving and adapting to situations. This ranges from spontaneously reconfiguring itself to release energy that negates magnetism to reconfiguring his weapons to use kryptonite radiation to better harm Supergirl to creating a device that manipulates and reflects signals to the point where anything attempting to use them to judge his location will believe they are fighting him), Teleportation, Time Dilation, Invisibility, and Psuedo-Causality Manipulation with Dimension Shifting (The Reach can move into the bleed in order to go invisible and intangible, as well as avoid detection. This allows him to go completely undetected, even to other Reach Tech. This allows him to appear near simultaneously in multiple places at once, and can use this to talk to his past self and move free from normal causality), Time Travel, Explosion Manipulation, Electricity Manipulation, Forcefield Creation (Can create forcefields that can’t be phased through), Radiation Manipulation, Telekinesis, Telepathy, Sound Manipulation, Body Control and Weapon Creation (Can create weaponry and shields out of his body and control it), Non-Physical Interaction (Harmed Typhoon, whose body is made of wind, fought with and hacked a group of foes with dimension shifted armor), Acausality (Can talk to his past self without issue, Black Beetle, his evil future self, caused his own turn to evil), Spatial Manipulation (Can pull things from in between reality and outside 3 dimensions into 3-D), Power Nullification (Can negate magic and Probability Manipulation. Negated the magic of an amplified Eclipso), Status Effect Inducement (Can use a population suppressor, which knocks out foes without harming them), Extrasensory Perception (Can see things that have shifted outside of three dimensions into N-Space or The Bleed), Resurrection Negation (The Bottom Feeder, a being cursed by God to never die, claimed that God had sent him to kill him forever. The Scarab also found a way to kill him permanently. The Bottom Feeder later attacked him again, as he had realized that Blue Beetle was the only thing capable of killing him permanently), Resistance to Telepathy, Information Analysis, Empathic Manipulation, Technology Manipulation, Hacking, Power Absorption, and possibly Acid Manipulation (Parasite was incapable of draining his powers. Resisted the attempts by The Reach to shut him down. Unaffected by a acid spray. Breaks through Bonita’s attempt to use her powers on him. Blocks Probe’s power to read minds and powers. The Scarab can also fry the brain of anyone who manages to actually get in)

Attack Potency: Solar System level (A Reach infiltrator like the scarab is enough of a threat for a Green Lantern ring to go ballistic and authorize lethal force. An inexperienced Jaime can fight on par with an enraged Guy Gardner)

Speed: Massively FTL+ (He has been shown to be able to dodge Tachyons, the faster-than-light particles. Wonder Girl and Supergirl considered him fast)

Striking Strength: Solar System Class (Has hurt Black Beetle when he got serious)

Stamina: Considerably High (Has survived hours of torture in a second and a half)

Intelligence: Very High (Should be comparable to the second Blue Beetle, Ted Kord, who was said to be smarter then Batman if one factored in his strategic ability. Fought with the Reach, the star spanning race that created the Scarab and regularly deployed plans that could last unnoticed for centuries, and made them question their ability, tricked them into revealing their location to the world, learned their language from the Scarab nearly instantly, and caused the Reach Negotiator to admit that they never stood a chance)

Weaknesses: Dispelling the armor originally caused Jaime intense pain. As time has passed, however, Jaime has found the process getting easier. Sometimes the Scarab struggles to distinguish allies from foes and will try to kill its target, while not being Jaime's intentions

Spider-Man (Marvel Comics) Spider-Man's Profile (Captain Universe Spider-Man was used, speed was equalized, both had all equipment, and both had 5 months of prep)

Geo Stelar (Mega Man Star Force) Geo's Profile (Speed was equalized, and while Geo started in Base, he was allowed to switch to any of his superior forms)