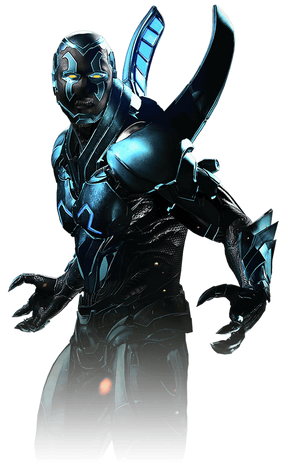 Blue Beetle is a playable character in Injustice 2.

Jaime Reyes sought Batman’s help in learning to use the Scarab, an alien weapon of mass destruction bonded to his spine. Although the Scarab could pose a deadly threat to the entire planet, kindhearted Jaime is determined to protect people, wary of the corruptive influence of great power he witnessed under the Regime.

Being a teenager, Blue Beetle acts much like a TV show and/or comic book fanboy. He geeks out whenever he sees a lot of his opponents (a lot of them being his favorite heroes), but will show no hesitation in fighting them if they don't reciprocate his love for his heroes.

Age: At least 18 (Stated directly by him, and implied from him saying he's old enough to drive)

Attack Potency: Small Country level (Can fight the likes of Black Adam or Cyborg. Stated to the be the most powerful member of Batman's team with Firestorm by Batman himself. Was able to fight against Aquaman while being mind-controlled by Gorilla Grodd)

Speed: Massively FTL+ (Can keep up with the likes of Black Adam)

Striking Strength: Small Country Class (Can harm the likes of Cyborg and Aquaman)

Durability: Small Country level (Endured powerful attacks from Cyborg and can resist to strikes from the likes of Black Adam)

Standard Equipment: His Scarab (Which allows him to turn his arms into several weapons like swords, maces of sonic cannons and create new limbs)

Intelligence: Gifted. Despite his newness to being a superhero, Jaime is very talented, being able to tackle with fighters who have far more combat experience, and come out on top. He is shown consistently to be far more mature than Jason (Firestorm). In addition, he is very versatile with the scarab and finds all kinds of ways to adapt it to a fight.

Weaknesses: Can be vulnerable to psychic powers. The Scarab has its own will and Jaime fears it will try to control him to enslave mankind one day.