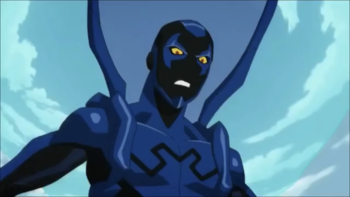 Jaime Reyes is a teenager who came in contact with a piece of alien technology known only as of the Scarab, which fused itself to Jaime's spine, causing him to become the Blue Beetle. Eventually, the Teen Titans found him and he became an official member. Reyes warned the others never to annoy the Scarab since he didn't have full control over it, which separated him from his family.

Classification: Human, Host of the scarab, Member of Teen Titans

Attack Potency: Small Building level (Comparable to other Titans. Burnt Robin's face when he temporarily lost control. Staggered Cyborg, albeit the latter defeated him easily. Harmed Brother Blood who had all of the powers of the Titans)

Speed: Supersonic (Was able to keep up with Robin and even blitzed him when he lost control)

Durability: Small Building level (Survived being thrown through a structure)

Stamina: High, was able to fight Brother Blood despite having most of his powers drained.

Intelligence: Smart, was able to find the weak point of Cyborg and knocked him out as well.

Weaknesses: Doesn't have full control over his Scarab which can cause it to lose control and end up hurting those around him.

Retrieved from "https://vsbattles.fandom.com/wiki/Blue_Beetle_(DC_Animated_Movies)?oldid=5356228"
Community content is available under CC-BY-SA unless otherwise noted.