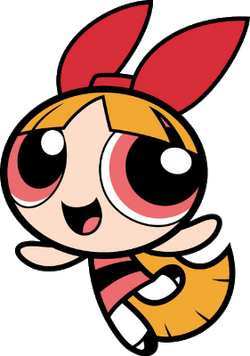 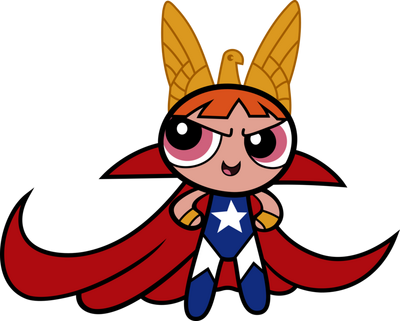 Blossom is the main protagonist of the animated television series The Powerpuff Girls, along with her sisters Bubbles and Buttercup. She's the Commander and Leader; she's the bright but egocentric leader of the superhero trio.

Name: Blossom, Liberty Bell, Commander and the Leader, Ice Princess (by Buttercup), The Smart One

Classification: Chemical X Experiment of sugar, spice, and everything nice, Leader of The Powerpuff Girls

Attack Potency: At least Island level (Nullified a solar flarewith her sisters, which produces at least 1e+20 joules of energy)

Speed: FTL (At least 1.2c, flew to and from an Asteroid belt in a short timeframe. Comparable to Bubbles who greatly outsped E-Male)

Durability: At least Island level (Tanked hits from the Rowdyruff Boys who are on the same level as her)

Range: Standard melee range (Could be lower with those stubby arms), higher with Ice Breath and Heat Vision.

Intelligence: Top of her class, easily the smartest of the trio, is a fantastic leader and strategist though it can leave her conceited from time to time. In addition, she has a keen intuition and a photographic memory, allowing her to make plans on the fly and remember small details and weaknesses to defeat her opponents with. Fluent in Chinese.

Standard Tactics: Unknown, depends on the situation, but her special ability is Ice Breath.

Weaknesses: She is prone to ticklishness, Threatening of Femininity (Powerprof, The Mane Event), Individuality (same as The Rowdyruff Boys), Antidote X (Slumbering with the Enemy), Sunburn (Sun Scream), Cooties (Cootie Gras), and arguing with her sisters in team battles.

Her special superpower is "Ice Breath" as revealed in the episode "Ice Sore". In "Ice Sore," surprised by her new found ability, Bubbles and Buttercup become very jealous of their sister. In the same episode, Blossom used her ice breathing ability to save Townsville from a flaming meteor. After this task was completed she was unable to breathe ice. In the same episode, when the weather condition turned from hot to cold, Blossom could suddenly breathe fire, implying when she has a cold her ice breath oddly enough becomes fire breath. She has only used that ability once.
She uses her ice breath as a last resort in her fight against Princess Morbucks and her super-suit after Bubbles and Buttercup regroup to beat her in a handicap and blows with her Ice Breath to freeze her outfit until it breaks her golden fighting suit into pieces.

Blossom has the unique ability among the Powerpuff Girls to speak Chinese. (revealed in "Little Miss Interprets," contrary to Bubbles's knowledge of many foreign languages). She can also read Chinese (revealed in "The Bare Facts"). Considering she has stated that she needs to "brush up" on said language, it can be assumed to be a learned ability.

Blossom's hair bow is revealed to be a highly explosive timer bomb, seen in Forced Kin. It is considered the Powerpuff Girls' last resort of defeating an enemy.

Start a Discussion Discussions about Blossom (1998)