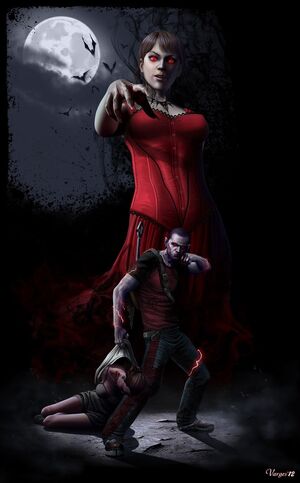 Bloody Mary was a vampiress created by Zeke Dunbar in a story he made up. Bloody Mary was a former governess before being converted into a vampire. After that, she went across Europe, killing solely for blood, to stay alive and get stronger. On one Pyre Night, Cole entered the catacombs to save some trapped civilians. However, despite her death for many years, her followers remained, and several of them were able to kidnap Cole and take him into a chamber with Mary's body laid out on a table. Aware of his capabilities, the vampire cut Cole open and dripped his blood into Mary's corpse in the hope that his Conduit blood would revive her

In a matter of seconds, Mary was resurrected from the dead. Lunging towards Cole and sinking her fangs into his neck, Mary began sucking more blood, and as she did, she got younger and stronger. Now restored to her former strength and appearance, Mary also turned Cole into a vampire in the process both as a reward for his unwilling service and as a means to bind him to her. Upon regaining consciousness, Mary explained to Cole that after sunrise, he would become her slave forever. Fleeing the catacombs, Mary was able to evade Cole and escape into the city with her followers. Now Mary had a psychic connection to Cole, as she is his Maker; the one who converted him into a vampire.

Mary later stopped feeding and took an interest in Cole's Electrokinesis abilities. None of her subjects had abilities like him and despite Cole's efforts to stop her and her followers by finding Ignatius' Barbed Cross, Mary constantly contacted Cole mentally and reminded him that she will have control over him.

Superhuman Physical Characteristics, Blood Absorption, Darkness Manipulation, Flight, Transformation (Can transform into bats to fly faster), Biological Manipulation and Transmutation (Can turn people into vampires via bites, anyone she turned into a vampire will become her slave after nighttime once the sun rises), Telepathy (She is connected to all her vampiric minions through some sort of telepathic link), Teleportation (Vampires have the ability to teleport seemingly out of nowhere), Summoning (Can summon Vampires to her side to aid her in combat), Animal Manipulation (Can control bats), Transformation (Can transform into a swarm of bats, mimic the appearance of a normal human, and was shown to have had the ability to turn into a Firstborn-like creature in the past), Power Nullification and Power Absorption (Mary is able to completely nullify the powers of any being under her influence. When Cole tries to attack her, she will cause him to keel over in pain and instantly deplete both his electricity and blood storage. Absorbed some of Cole’s power by draining his blood), Willpower Manipulation (Able to control the willpower of those she turns into Vampires. Was able to control the wills of her legions of hundreds of Vampires, even while in a severely decomposed state, for over 300 years. Made it so that Cole MacGrath was incapable of attacking her), Sound Manipulation/Breath Attack (Can release destructive sonic screams), Limited Electricity Manipulation/Technology Manipulation (Her mere presence causes technology to spark and be disrupted), Gravity Manipulation (Her presence causes objects around her to float in the air similar to zero-gravity), Immortality (Types 1, 3 and 7 due to Vampirism), Energy Manipulation (Can unleash some sort of energy blasts), Homing Attack (Can fire Seeker Missiles which can home in on targets), Extrasensory Perception (Vampires possess supernatural senses that can perceive spirit trails, see through Glamour illusions, and read mystic glyphs invisible to the naked eye), Illusion Creation and Perception Manipulation via Glamour (Can cast life-like illusions and affect mortals’ perception with Glamour, with only a Vampire’s senses being able to see through them), Regeneration (At least Low-Mid. Vampires can regenerate from severe decomposition as long as they have absorbed enough blood, are not staked through the heart, or struck by holy weapons like the Barbed Cross)

Resistance to Illusions and Holy Manipulation (Can withstand being struck multiple times by the Barbed Cross, a holy weapon that can instantly incinerate normal Vampires)

Attack Potency: At least Large Mountain level (Comparable to Cole MacGrath. Also gained some of his power after draining his blood)

Speed: Relativistic+ (Was one of the strongest vampires around, Could match Cole in combat)

Weaknesses: As a Vampire Bloody Mary is extremely vulnerable to sunlight, prolonged exposure will kill her. The Barbed Cross will also severely injure her if she is struck by it.

Bloody Mary is a centuries-old vampire; as such she possesses a greater array of powers than any of her "minions".