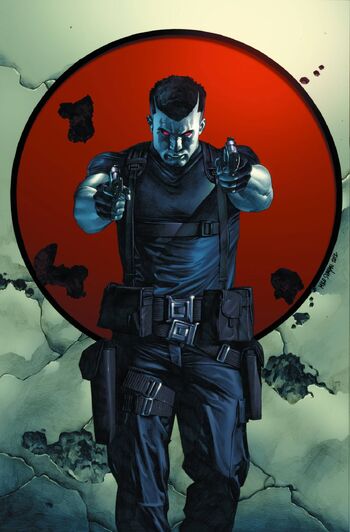 Attack Potency: Wall level (Killed a cougar while he was in a weakened state. As strong as other Bloodshots, who are capable of killing sharks with their bare hands. Comparable to Archer)

Lifting Strength: Class K (Ripped off the spine of a cyborg)

Durability: Wall level (While weakened, tanked being punched into the ground, said punch was powerful enough to shake vehicles a dozen meters away)

Stamina: Extremely high, regeneration makes him very difficult to kill, capable of holding his breath underwater for over 9 minutes. Confronted Toyo Harada even with his face ripped off; killed and devoured a cougar while bleeding and with his legs broken. Immune to intoxication and mental attacks

Intelligence: High, ex-military soldier trained in the use of weapons, close combat and strategy

Weaknesses: Bloodshot needs to consume amino acids in order to sustain the nanites, which grant him regeneration and super strength; in extreme situations, Bloodshot can consume his own muscles in order to prevent this weakness. Despite being capable of regenerating even when his head is blown off, it takes a great amount of time to do so

Scar (Fullmetal Alchemist) Scar's Profile (Note: Speed was equalized. This was Scar before he unlocked his reconstruction powers)