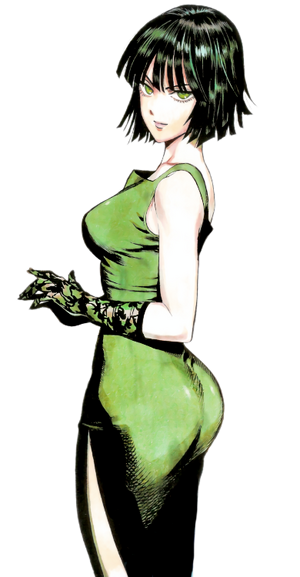 Blizzard of Hell (地獄のフブキ, Jigoku no Fubuki) also known as Fubuki is an esper, the younger sister of Tornado of Terror and the leader of the B-Class superhero group "The Blizzard Group."

Powers and Abilities: With psychic capabilities, she can augment herself into having Superhuman Physical Characteristics, Forcefield Creation, Telekinesis, Wind Manipulation, Attack Redirection, Able to temporarily nullify the powers of other Espers, limited Statistics Amplification (Reinforcedboth Bang and Bomb's bodies to be both faster and stronger for a short time)

Attack Potency: City Block level (Blocked an attack from Do-S and damaged her with a Hellstorm) | City level (Defended against an attack from Overgrown Rover that would have damaged both Bang and Bomb)

Weaknesses: Fubuki is very insecure and gets easily intimidated by sufficiently strong opponents. She also cares for a group of weaker fighters that admittedly hold her back. Fubuki has been stated to be overly emotional and too reliant on fighting with numbers by Saitama as well. Sufficiently strong Espers can resist her Psychic Sealing. Like her sister, her psychic powers weaken if her brain suffers any direct damage.

Start a Discussion Discussions about Blizzard of Hell (Fubuki)