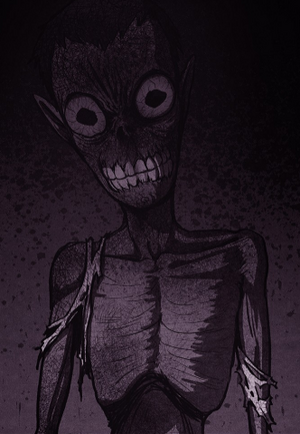 Out of the pressure of work, he accepted his inner "demon's" offer and became a monster, trying to kill everyone, believing them to be his boss.

Powers and Abilities: Superhuman Physical Characteristics, Technology Manipulation (Makes communication devices like phones and radios malfunction), Resurrection (Even after being killed, it will resurrect in a few minutes to at most a few hours, depending on the level of damage), Adaptation and Reactive Evolution (Under duress and stress monsters can evolve into stronger versions of themselves), Multiple Personalities (The human part of it's mind is "sealed" into an eternal dream where he can be happy forever), Enhanced Senses (Can feel vibrations and sounds from several meters away, and light breathing from another room was enough to make it aware of someone's location), Body Control and Natural Weaponry (As seen here) Immortality (Type 1, 2 and 4)

Attack Potency: Street level (Monsters are normally stronger than what is humanly possible), Wall level with piercer (Can pierce through the Protein Monster with ease)

Range: Tens of meters (Can shoot it's arm out for long enough for it to reach up to several stories high from outside a building)

Intelligence: Below average, lost most of it's intelligence upon transformation

Weaknesses: Cannot see, and heat can negate it's durability due to it's cells being mostly made of protein

Piercer: It's hand stretches out, and several branches come out of it, which they themselves branch out, piercing anything in their way.

Retrieved from "https://vsbattles.fandom.com/wiki/Blind_Monster_(Sweet_Home)?oldid=5430906"
Community content is available under CC-BY-SA unless otherwise noted.