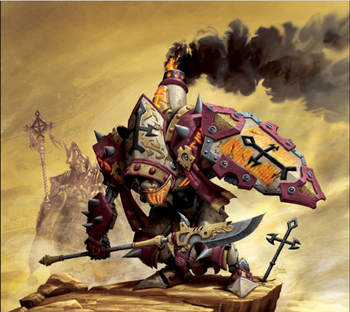 The Blessing of Vengeance is the personal Revenger of Severius. It has been modified with a more powerful divine arc node that boosts the power of spells channeled through it, and a more advanced cortex which boosts it's Intelligence, and attack accuracy. Blessing of Vengeance has shown a willingness to risk it's own destruction in insure Severius can get the perfect shot with his spells.

Speed: Supersonic+ (On par with character that can react to lightning strike)

Stamina: Above Average (As a light warjack it can fight for 90 minutes before it burns through all it's coal supply)

Intelligence: Average, higher with a warcaster

Weaknesses: Being a warjack if it's warcaster is knocked out or killed it shuts down

Retrieved from "https://vsbattles.fandom.com/wiki/Blessing_of_Vengeance?oldid=5130194"
Community content is available under CC-BY-SA unless otherwise noted.