Bleach is a popular shonen made by Tite Kubo in 2001. It basically follows the adventures of Ichigo Kurosaki who starts off in high school and always had the ability to see ghosts, Shinigami and Hollows. The beginning parts of the story delve around his friends, Rukia and hollows. Eventually once he gains Rukia's powers, he becomes a Shinigami and eventually become more involved with them and their enemies, Hollows.

Like the rest of the Holy Shounen Trinity, Bleach started out relatively modestly powerful but got more impressive feats as the series progressed. As of the last arc, Bleach boasts of High tiers ranging from Town level+ all the way up to Large Island level, Top tiers ranging from Large Country level to Continent level, and the God Tiers sitting at Planet level to Multi-Solar System level. The verse is also known for its speed, with even weaker officers at Gotei 13 and Arrancar numbers being at least Massively hypersonic, while someone at Captain Shinigami's level or higher is Relativistic for FTL, and the divine layer being Massively FTL. Bleach also has a variety of hax such as: Reality Warping, Illusion Creation, Future Manipulation, Past Manipulation, Restructuring, Name Manipulation, Poison Manipulation, Two Hit Kill, Invulnerability, Absolute Zero, Power Absorption, Power Nullification, Power Mimicry, Age Manipulation, Reactive Evolution, Invisibility, Intangibility, Memory Manipulation, Durability Negation, Empathic Manipulation, Sealing, Time Manipulation, Probability Manipulation, etc. In addition, most Bleach characters are invisible to those without spiritual powers and can fly. They can also cross into different realms, making conventional BFR hard to use against them. Shinigami are able to use Kidō to seal and bind. Quincy can absorb surrounding energy and can use Blut to enhance their defense or offense capabilities. Currently, credit for the vast majority of technique descriptions belongs to the Bleach Wiki.

Threads Discussing the Multipliers and Scaling

Blut (血装 (ブルート), Burūto; German for "Blood", Japanese for "Blood Guise"): A Quincy ability that gives one inhuman defensive and offensive capability by making Reishi flow into their blood vessels. Bringer Light (完現光 (ブリンガーライト), Buringā Raito; lit. "Full Manifestation Light"): Fullbringers can induce states of high-speed movement through Fullbring. Such movements are accompanied by the flickering of a green luminescence called which is the preliminary for each high-speed movement. This speed is achieved through a variety of different uses of Fullbring. By pulling on the soul of the ground beneath their feet, Fullbringers can increase its elasticity, greatly enhancing their jumping ability as a result. In addition, by Fullbringing the air around them, they can accelerate their movements. Doing so can consequentially strengthen the force of their blows. Dangai: (断界, Parsing World), also known as the Precipice World, is the dimension between Soul Society and the Human World, separated from space and time. Garganta (黒腔 (ガルガンタ), Garuganta; Spanish for "Throat", Japanese for "Black Cavity"): is how Arrancar and Hollows move to and from Hueco Mundo. Hakuda (白打, White Hits): is a close-combat style of fighting, in which one is unarmed and uses only one's body, and is one of the four basic fighting styles of the Shinigami. Captain Suì-Fēng of the 2nd Division excels in this style. High-speed Taijutsu (体術, Body Skill) attacks are used to overwhelm the opponent. Physical strength and skill is determined by this class. It seems to be a combination of several martial arts. Hirenkyaku (飛廉脚, Flying Screen Step; Viz: "Flying Bamboo-Blind Leg"): is an advanced Quincy movement technique, allowing the user to move at high speed by riding on the flow of Reishi created below their feet. Essentially, it is the Quincy equivalent to the Shinigami's Shunpo and the Arrancar's Sonído. Hohō (歩法, Step Method; Viz "Fast Movement"): is a defensive style of fighting which relates to footwork, it is one of the four basic combat skills of the Shinigami. Hohō is an important skill for most Shinigami, which incorporates speed and agility. The skill level of Hohō can be enhanced and improved through concentration, training, and mastery of it.

Kidō (鬼道, Demon/Spirit Way; Viz "Soul Reaper's powers"/"Spells"; sometimes translated as "Demon Arts"): is a form of Shinigami combat based on advanced spells. These spells are produced with strong Reiryoku and fall into two categories: Hadō for direct attacks, and Bakudō for battle support. It is one of the techniques in the Zankensoki, the group of Shinigami primary combat skills. Kidō spells are triggered by an incantation. Experienced users can trigger them without an incantation, though the effectiveness of the spell may be diminished. Muken (無間, Avici): is the eighth and final level of the underground prison. Muken is a voided space completely sealed off from the outside world, aside from the main tower that serves as the entrance and exit. The realm stretches on infinitely. Reiatsu (霊圧, Spiritual Pressure): is the physical force/pressure that a person’s Reiryoku creates when released. Most Shinigami, Arrancar and Quincy can manipulate the release of their Reiatsu. Reiraku (霊絡, Spirit Coils): are the visualization of Reiryoku into ribbons, which spiritually aware beings can follow. Reiryoku (霊力, Spiritual Power): is a power aligned with the spiritual sensitivity and willpower of the user. It is used by Shinigami and other spiritual beings to provide power for their various abilities. Reishi (霊子, Spirit Particles): is the main component material of Souls and all spiritual matter. Sonído (響転 (ソニード), Sonīdo; Spanish for "Sound", Japanese for "Sound Ceremony"): is a high-speed movement technique of the Arrancar. It is equivalent to the Shinigami's Shunpo and the Quincy's Hirenkyaku, which are roughly equal in terms of speed. Zanjutsu (斬術, Swordsmanship; Viz "Art of the Sword"; Cutting Technique): is the fighting style for the Zanpakutō (i.e. sword fighting) and is one of the four basic fighting styles of the Shinigami. It is shameful for a Shinigami to not master at least this technique. It is the specialty of Captain Kenpachi Zaraki of the 11th Division. 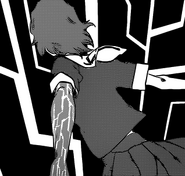 Retrieved from "https://vsbattles.fandom.com/wiki/Bleach?oldid=6990201"
Community content is available under CC-BY-SA unless otherwise noted.