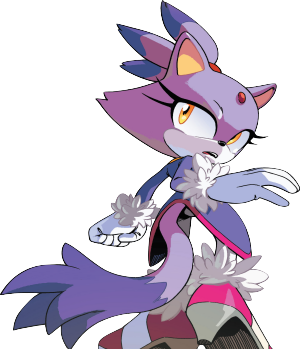 Blaze the Cat is a character that appears in the Sonic the Hedgehog comic series published by IDW Publishing. She is an anthropomorphic cat, a princess from another dimension, and the guardian of the Sol Emeralds.

Superhuman Physical Characteristics, Levitation, Pyrokinesis, Statistics Amplification (Can manipulate fire to amplify the power of her physical strikes), Can sense the energy of the Sol Emeralds, Teleportation, Dimensional Travel, Transformation (By absorbing energy from the Sol Emeralds to become Burning Blaze)

Same as before on a vastly enhanced scale, True Flight, Energy Projection

Attack Potency: Multi-City Block level+ (Comparable to Sonic. Destroyed a Super Badnik with a single blast) | At least Planet level (Is empowered by the Sol Emeralds, the inter-dimensional counterparts of the Chaos Emeralds, which are stated to be threats of this level)

Intelligence: Likely Gifted. Blaze is a skilled combatant, capable of taking down hordes of enemies by compiling graceful acrobatic maneuvers with her deadly pyrokinetic abilities. Also has experiences similar to her game counterpart. 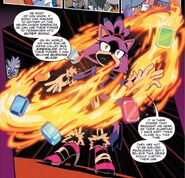 Blaze with the Sol Emeralds

Burning Blaze
Add a photo to this gallery

Sentinel Prime (Transformers) Sentinel's profile (Both at 8-A, speed equalized)

Start a Discussion Discussions about Blaze the Cat (IDW)