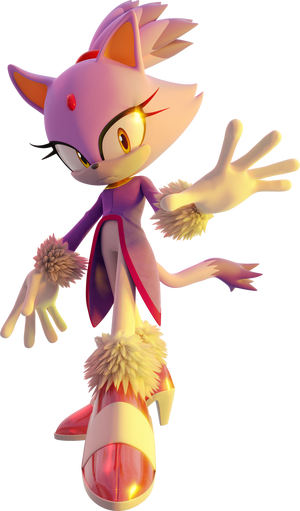 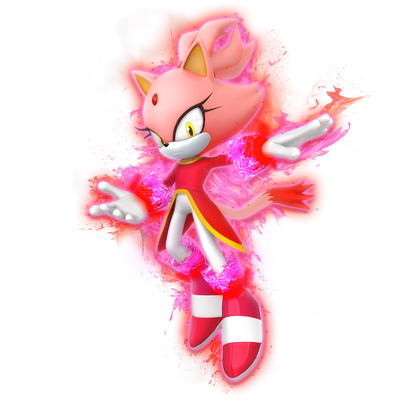 Blaze the Cat is a fictional character from the Sonic the Hedgehog series. She is an anthropomorphic cat and a princess hailing from an alternate dimension, where she is both the regent of her world and the appointed guardian of the Sol Emeralds, a role similar to that of Sonic and Knuckles combined. She is gifted with the power of pyrokinesis, which lets her create and manipulate fire in any way she pleases.

Blaze is normally calm and elegant, but tends to conceal her true feelings. Devoted to her position, she sometimes gets herself bogged down by her own strict discipline, which made her anti-social, shy, and unfamiliar to the concept of having friends. After spending time with Sonic and Cream , however, Blaze has discovered the true meaning of friendship, allowing her to accomplish tasks for the good of her people and the innocent which she could never do alone. Despite the initial boundaries separating them, Blaze now travels freely between her dimension and Sonic's to visit her friends.

Classification: Anthropomorphic Cat, Guardian of the Sol Emeralds, Princess of the Sol Dimension

Powers and Abilities: Superhuman Physical Characteristics, Vehicular Mastery, Levitation, Fire Manipulation, Teleportation, Her own form of Homing Attack. and Aura for Boost and Defense (While using her boost technique, Blaze creates an aura that coats her and allows her to barrel into enemies and obstacles with no repercussions), Sealing, Can sense the Sol Emeralds and dimensional disturbances, Likely Hammerspace, Breaking the Fourth Wall (In the Rush games, Blaze will jump out and get scared if you touch her on your screen), Dimensional Travel (Can travel freely in both Sonic's world and her own), Paralysis Inducement (Via Stun), Forcefield Creation (Of fire and electricity varieties), Transmutation via Ring Time, Statistics Amplification (Can enhance her movement speed with Speed Shoes), Invulnerability (With the Invincibility Monitor), Self-Sustenance (Type 1; Can survive in space). With the Color Powers: Transformation, Fire Manipulation and Explosion Manipulation (With Red Burst and Black Bomb), Vibration Manipulation (With Blue Cube and Gray Quake), Energy Projection (With Cyan Laser and Crimson Eagle), Electricity Manipulation (With Ivory Lightning), Invisibility (With Jade Ghost), Transmutation, Pseudo- Black Hole Creation, Gravity Manipulation, Size Manipulation, and Absorption (With Indigo Asteroid, Violet Void, and Purple Frenzy), Intangibility (With Violet Void), Flight and Levitation (With Crimson Eagle, Green Hover, Indigo Asteroid, Magenta Rhythm, Orange Rocket, and Violet Void), Void Manipulation (With Violet Void). Resistance to Extreme Cold, Cosmic Radiations and Fire Manipulation (Was unaffected by the fire traps in Sky Babylon) | All of the previous abilities on a massively enhanced scale, Possibly all of the abilities Super Sonic has (Since the Sol Emeralds are very similar to the Chaos Emeralds in every way, Blaze should have her own version of her Chaos abilities), Positive Emotions Empowerment, True Flight, Spaceflight, Self-Sustenance (Type 3)

Attack Potency: Planet level+ (Capable of fighting on equal terms with Adventure Sonic. Fought Iblis alongside Silver) | Multi-Solar System level to Low Multiverse level (The Sol Emeralds are akin to that of the Chaos Emeralds as their otherworldly counterpart, so she should be equal to Full Power Super Sonic, who were both able to fight and defeat the Egg Wizard with the Jeweled Scepter, which allowed Eggman and Eggman Nega to harness the Power of the Stars, which was sustaining Sonic and Blaze's universes. Super Sonic also matched Solaris with his full power)

Speed: At least FTL (Kept up with Silver and is easily comparable with Sonic in speed) | Massively FTL+ to Immeasurable (Comparable to Super Sonic)

Lifting Strength: Class M | Pre-Stellar (Superior to the Hyper-Go-On energy that the Wisps use) to Immeasurable via Powerscaling

Durability: Planet level+ (Took damage from the Egg Salamander and survived, although she was briefly knocked out and can tank Sonic's attacks) | Multi-Solar System level to Low Multiverse level (The only attack in games which was shown to be able to damage her was the Egg Salamander's spatial void attack which seemed to have properties similar to a black hole. Comparable to Super Sonic, who withstood hits from Solaris)

Intelligence: Gifted (She has extensive knowledge on the various aspects of her world like the Vikings, Pirates, the Jewel Scepter, etc. And despite her age, she is the princess of the Sol Dimension and her duties is almost of that as a queen due to her mature behavior and how to keep things in check without falling apart), highly skilled in combat and is the only female character in the series to fight Sonic to a standstill in close combat.

Weaknesses: Blaze is acrophobic, she becomes nervous and jittery when in high places, stubborn, introverted, can be hotheaded and susceptible to taunts | None notable

List of all the item boxes in the Sonic Series

Note: Whether or not this is true, it's likely possible Blaze can utilize all of the wisps due to her being in Team Sonic Racing where all the wisps (Including a wisp name Jade Ghost) are present and can be used as items to help one's team get ahead in the race. But that's very debatable.

Sir Percival (Blaze's Ancestor)
Add a photo to this gallery

Silver (Sonic the Hedgehog (The Universe)) Silver's Profile (Both start off in Base then go into their Super States. Victory via KO)

Rayquaza (Pokémon) Rayquaza's Profile (Blaze was in base form, while Rayquaza was in it's Mega form)

Start a Discussion Discussions about Blaze the Cat