VS Battles Wiki
Register
Don't have an account?
Sign In
Advertisement
in: Tier 8, Tier High 8-C, Tier 8-A,
and 36 more 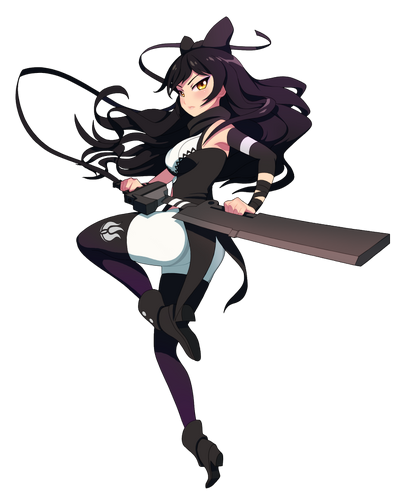 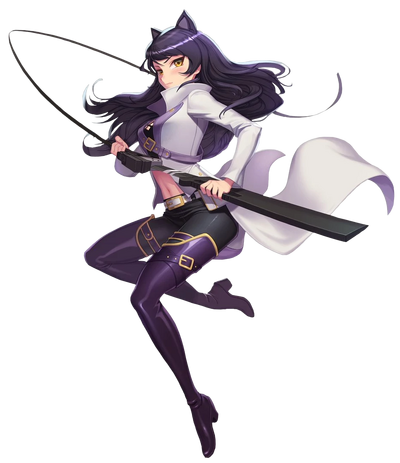 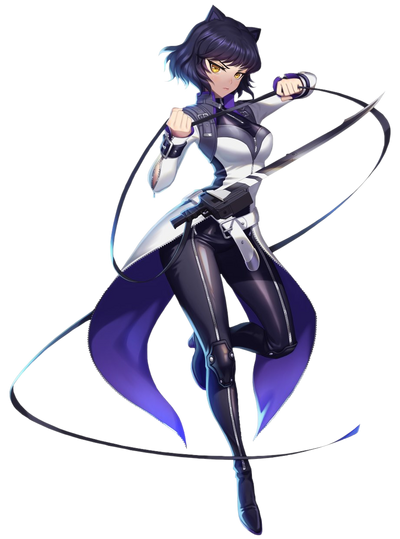 Blake Belladonna is one of the main characters and the third character introduced in RWBY. A young woman with long black hair, amber-colored eyes and a black ribbon resembling animal ears on her head, she wields the Gambol Shroud, a katana with a sharpened sheath that has a pistol in the hilt attached to a long ribbon which she uses in the style of kusarigama. In battle, her Semblance allows her to create a shadow of herself, an empty copy that distracts or takes hits from enemies for her while she moves in a different direction. Blake has a quiet nature and a love for books. She is a Faunus (a persecuted humanoid race with animal-like features) and a former member of the White Fang, a social rights advocacy group turned extremist paramilitary organization. However, she left in disgust of their violence and joined Beacon Academy to become a Huntress. Blake keeps her Faunus identity a secret by concealing her cat ears because she feels that she is not ready for the attention it would give her if the secret got out and doesn't want the discrimination other Faunus receive from humanity.

Powers and Abilities: Superhuman Physical Characteristics, Acrobatics, Expert blade-wielder and markswoman, Enhanced Senses (Being a Faunus gives her enhanced hearing and grants her night vision), Aura (Able to use her Aura for numerous purposes), Forcefield Creation (Aura can be used as a full-body forcefield), Statistics Amplification (Can use Aura to enhance her striking power), Enhanced Senses (Can use her Aura to sharpen her senses), Regeneration (Mid-Low), Stunning, Darkness Manipulation, Duplication (Via Semblance), Energy Projection, Elemental Manipulation via Dust Rounds (Fire Manipulation, Ice Manipulation, Gravity Manipulation, and Earth Manipulation), Flash-Freezing with Ice Dust, Resistance to Extreme Heat and Cold (Aura protects the user from sub-zero temperatures, allowing them to walk through a blizzard in casual clothing or be encased in ice without being cold, as well as extreme heat up to and including the heat of flames, being blasted with steam, and being submerged in lava without being burned)

Speed: Hypersonic (Comparable to Yang Xiao Long, and had her speed complimented by Sun Wukong. Can react to the Spider Droid's bullets and dodge Roman's explosive slugs, as well as evade missiles) | Hypersonic+ (Dodged the Sea Dragon's lightning breath and is comparable to, if not faster than Sun Wukong, who could intercept the same attack while jumping) | Massively Hypersonic (Comparable to Mercury Black and Emerald Sustrai, who could dodge lightning) | Massively Hypersonic

Stamina: Hunted Grimm alongside the rest of Team RWBY for an entire day. Lasted a decent length of time against Adam in her second fight with him, and has engaged in a number of intense fights that lasted minutes without getting visibly tired

Range: Extended melee range with the Gambol Shroud in katana mode. Several meters in chain form. Hundreds of meters in pistol mode and with Blade Beam.

Intelligence: Gifted (Having been a member of the White Fang at a young age, Blake is very skilled in multiple forms of combat, mostly using Gambol Shroud in slashing through hordes of enemies with startling speed and deflecting incoming gunfire with the sword and sheathe alone, and is well adept using her weapon as a conduit for her Aura: generating shockwaves with her swings to augment her blows. She is skilled at using her weapon in gun and sickle mode to their fullest effect in tandem with her combat skills against multiple Grimm and White Fang members, as well as use her Semblance to trick her opponents, like she did against Roman Torchwick combining her Semblance with multiple Dust ammunition and pinned him down. Due to her former status as a White Fang member, she is also skilled in assassination, espionage and trickery on various missions. She also extensive book knowledge from her reading and studying. After the Fall of Beacon, Blake has developed leadership skills, inspiring the Faunus in Menagerie to stand against Adam.)

Weaknesses: Continual use of her Aura will cause it to decay to the point where she can be left open to more significant damage. Aura's durability is cumulative; it will deplete with each attack she takes and can be brought down by characters of similar strength. Semblances drain aura by a small amount and without aura they cannot be used until the user's aura is recharged. Constant exposure to extreme temperature can drain the user's aura. 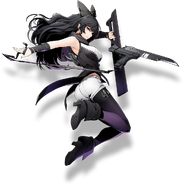 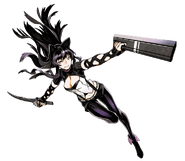 Blake in the Manga

Blake in the Bilibili Mobile Game