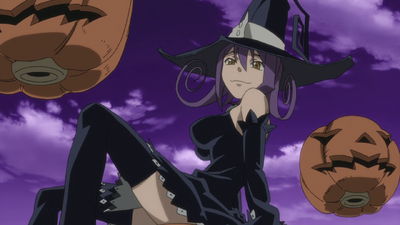 Blair is a monster cat possessing strong magic that lives in Death City. Originally, Maka and Soul set off to kill her, thinking that she was a witch. Initially easily defeating both students, she was eventually defeated and had her soul eaten by Soul. Unfortunately for them, Blair being a cat and not a witch caused them to lose all of their accumulated souls and start from the beginning.

Powers and Abilities: Superhuman Physical Characteristics, Flight, Magic, Energy Projection, Transformation (Can transform into a cat and back), Explosion Manipulation, Cloth Manipulation, Size Manipulation (Can shrink objects with her magic), Soul Manipulation (Can hurt the Flying Dutchman), Resurrection (As a cat, she has nine lives and nine souls and thus can come back instantly to life even if her body and soul are destroyed. However, she can only do so a limited number of time)

Weaknesses: She can only resurrect nine times before dying for good. This number is reduced to eight later in the series, due to having died against Maka and Soul. She can sometimes be careless due to her resurrection.

Retrieved from "https://vsbattles.fandom.com/wiki/Blair?oldid=4108091"
Community content is available under CC-BY-SA unless otherwise noted.