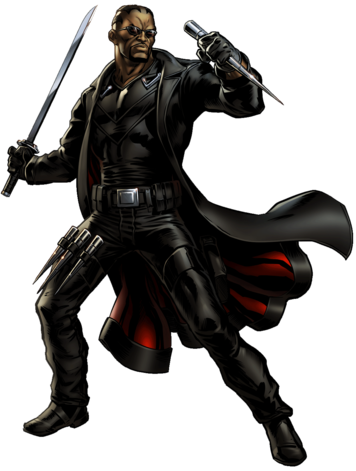 Blade is a character from Marvel Comics who is a half-vampire hybrid and a vampire hunter.

Eric Brooks, the man later known as Blade, was born in 1929. His father, Lucas Cross, a member of the secret society the Order of Tyrana, sent his pregnant wife Tara to England before he was taken a prisoner in Latveria. There she took the name Vanessa Brooks and found shelter with brothel owner Madame Vanity, another member of the Order of Tyrana. Experiencing labor complications, Tara was forced to seek a doctor's assistance.

The doctor, Deacon Frost, was actually a vampire and feasted on the woman as she gave birth, passing on a series of enzymes that altered her baby. The enzymes entered the infant's bloodstream, transforming him into a Dhampir - a being tainted by a vampire's kiss, but not converted. In other words half-man, half-vampire. Frost was driven away before he could slay the child, but Tara perished, leaving the orphaned Eric Brooks to be raised at Madame Vanity's brothel.

Though Blade is crusading against forces that are a threat to humanity, he is also a loner by nature and does not take orders well. For this reason and also the nature of the foes he fights he often operates outside society, and rarely interacts with other superheroes.

Powers and Abilities: Superhuman Physical Characteristics, Master Martial Artist, Weapon Mastery (Master swordsmen and expert marksman who can wield numerous forms of weaponry), Durability Negation with his adamantium sword, Immunity to vampire vulnerabilities such as sunlight, Longevity, Regeneration (Mid-Low), Enhanced Senses, Explosion Manipulation (Always carries with him explosive charges), Resistance to Possession (Casually resisted having someone trying to transfer his soul into his body to control him)

Attack Potency: At least Building level (Considerably stronger than Captain America. Fought Wolverine, and later fought and killed a clone of Wolverine with help from the real one, was also prophesied to kill that clone together with Wolverine. His explosives are this powerful). Can negate durability with his adamantium sword

Striking Strength: At least Building Class. Can negate durability with his adamantium sword

Intelligence: Master martial artist, swordsman, marksman, can speak multiple languages and has years of experience in fighting vampires, demons, and all kinds of enemies

Note: There are many versions of Blade, this profile covers mainly the 616 Marvel comic book version.