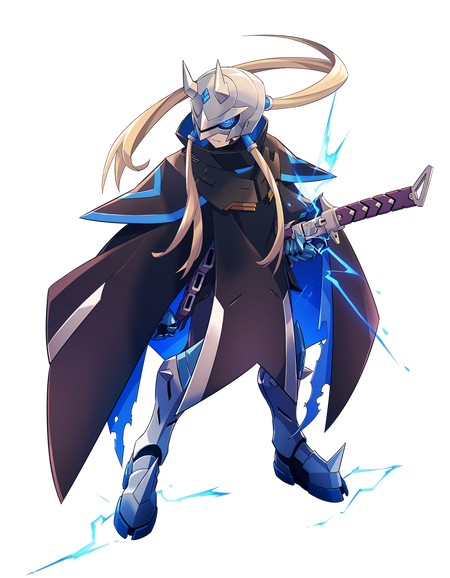 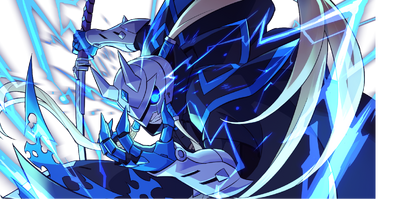 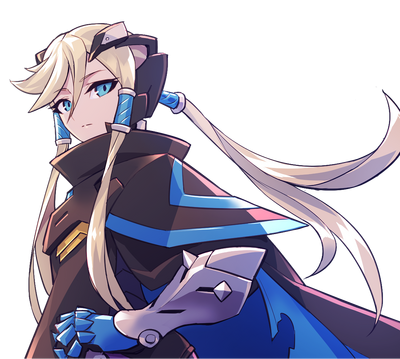 A former Mino and sister to Kohaku, Blade was captured by Demerzel as a means to be the new "King" of a new society for Adepts, Demerzel's new world order, replacing the deceased Gunvolt. After forceful experiments and being subject to the command of the Butterfly Effect, Blade became the blind servant of corrupt Sumeragi under Demerzel's command as the third artificial wielder of the Azure Striker Septima.

Powers and Abilities: Superhuman Physical Characteristics, Expert Swordswoman, Electricity Manipulation, Afterimage Creation (Berserk Trigger only), Likely should have all of Gunvolt's other Septima-based abilities due to being an Azure Striker herself (though, these are never shown, especially Flashfield and Prevasion), Absorption (Of electricity, scaling to Gunvolt), Absorption Negation (Azure Strikers can't absorb one another's electricity), Resistance Negation (Azure Strikers are able to damage each other with electric attacks),  Rage Power and Berserk Mode (via Berserk Trigger), Magnetism Manipulation (Can extend her sword's detachable blades widely apart from each other and put them back together, connect them with high voltage electricity, and more with her Septima), Hacking/Data Manipulation to bypass Elemental Intangibility (Azure Strikers, and to an extent electrical attacks have the ability to disable Copen's Prevasion subroutine through hacking), Pseudo-Teleportation (She can seemingly transport herself from place to place instantly using lightning as her catalyst for movement), Resistance to Electricity Manipulation (Scaling to Gunvolt)

Attack Potency: Large Mountain level (Fought Copen, fought four holographic Asimovs and one shot one of them (Albeit when the one who created them was nearly dead)), higher with Berserk Trigger

Intelligence: At least Above Average in combat (Was able to fight Copen, who had that point been fighting for over a hundred years)