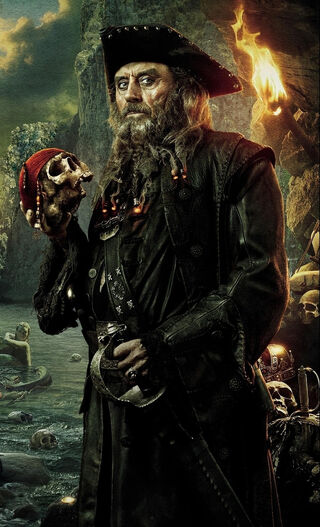 Captain Edward Teach, better known as Blackbeard, is the main antagonist of Pirates of the Caribbean: On Stranger Tides. He is an infamous Pirate, based on the real-life Pirate of the same name, who wishes to claim the Fountain of Youth for himself. He is also a pirate that every pirate in the world is afraid of (presumably and arguably apart from Hector Barbossa and Davy Jones), due to his powers and ruthlessness.

Tier: 9-B, higher with the Sword of Triton's powers

Age: 70 years old by the time of his death

Attack Potency: Wall level (Is one of the most feared pirate of all History. Has sparred with Hector Barbossa), higher with the Sword of Triton's powers (The sword allows its user to control ships and rule them according to his will even if if the wielder is not onboard)

Range: Standard melee range. Extended melee range with swords. Tens of meters with pistol, much higher with the Sword of Triton's powers

Intelligence: Gifted. Blackbeard is a ruthless pirate with decades of experience as a sailor and a formidable combatant, the point he quickly became a living legend and is regarded as the most famous pirate who ever lived. He is an excellent strategist and manipulator and possesses a high degree of supernatural knowledge, having studied voodoo and dark magic. Teach also made a complex plan which allowed him and his crew to capture a mermaid and gain a tear from one of them.

Weaknesses: Is immensely sadistic and only cares for himself which can lead him to dismiss anyone else, otherwise none notable.

Retrieved from "https://vsbattles.fandom.com/wiki/Blackbeard_(Pirates_of_the_Caribbean)?oldid=5485577"
Community content is available under CC-BY-SA unless otherwise noted.