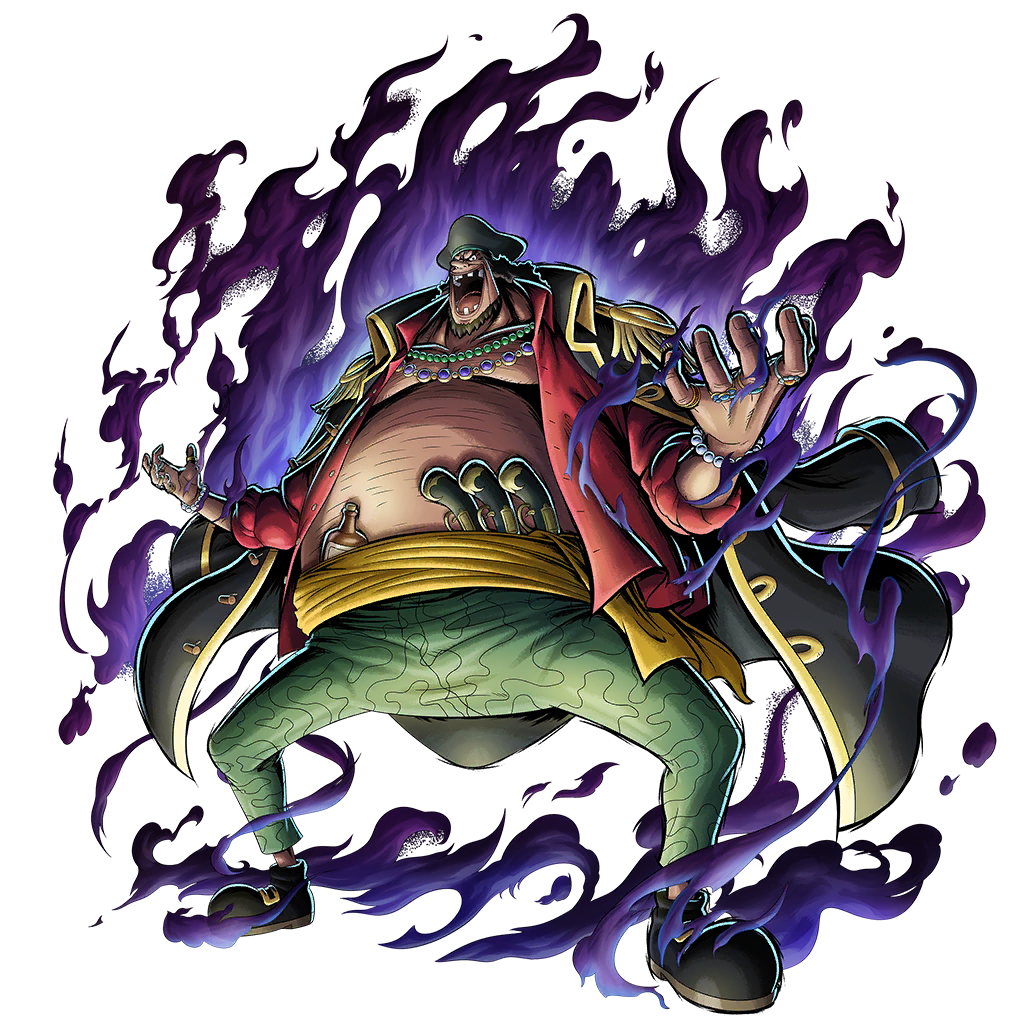 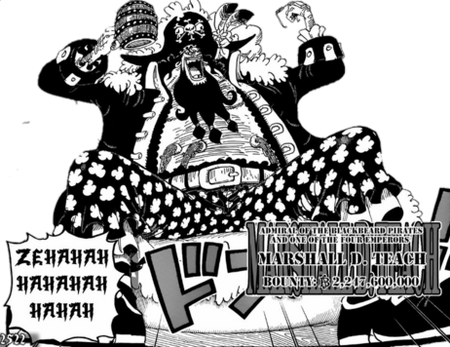 Marshall D. Teach, also known by his epithet ‘Blackbeard’, is the captain, later admiral, of the Blackbeard Pirates and one of the Yonko who rules over the second half of the Grand Line, the New World. He was once an ambitious former member of the Whitebeard Pirates, specifically in the second division led by Portgas D. Ace until he murdered the Fourth Division Commander, Thatch, to get his hands on a specific Devil Fruit before defecting the crew. That Devil Fruit was the Yami Yami no Mi, a Logia which affords him the power of darkness.

Being introduced as a cherry pie loving pirate who made an impact on Monkey D. Luffy in Jaya, Marshall "Blackbeard" D. Teach’s relevance to the story and One Piece world took a dramatic turn when he defeated Ace and turned him over to the Marines to secure a position as one of the Seven Warlords of the Sea. However, he briefly held this newfound status before resigning upon entering Impel Down during the Marineford War and recruited some high-bounty pirates into his crew, then headed to Marineford during the climax of the war, to kill a weakened Whitebeard together with his crew, somehow taking Whitebeard’s Gura Gura no Mi power for his own, before departing after Shanks' arrival. Two years later, it is revealed that he took over Whitebeard's territory and position as one of the Four Emperors. He and his crew are now searching for high-level Devil Fruit users to kill so they can steal their powers.

He is very notable for becoming a Warlord with a former bounty of 0, having been almost completely unknown beforehand. However, after becoming an Emperor, he's revealed to have racked up a bounty of 2,247,600,000 berries—the 5th highest known bounty in the series.

Many of One Piece’s characters have their own distinct laughter. Blackbeard follows this tradition by starting his laughs with “Ze” (i.e. Zehahahahahaha!)

Powers and Abilities: Superhuman Physical Characteristics, Haki (Armament and Observation user), Flintlock pistol and Claw user, Proficient Hand-to-Hand Combatant, Darkness Manipulation, Absorption, Gravity Manipulation, BFR, Black Hole Creation, Power Nullification (Can nullify the Devil Fruit abilities of others by touching them), Limited Power Absorption (Can absorb Devil Fruit abilities, but only demonstrated the power to take the ability of a dead DF user and has only shown the capacity to have two fruit abilities so far) | Same as before, Vibration Manipulation with Gura Gura no Mi (Absorbed Whitebeard's devil fruit, which gives the ability to generate powerful shock waves by emitting vibrations), Air Manipulation (Can use air-quakes through cracking the air and sending shock waves through the air as a result), Water Manipulation (His shockwaves are able to create large tsunamis), Weather Manipulation (His shockwaves are able to affect the sky, bringing great storms) and Earth Manipulation (With his power he can tilt the ground), Limited Durability Negation (His vibrations can pass through the opponent's body, affecting them internally), Minor Resistance to Heat Manipulation

Attack Potency: At least Mountain level+, possibly Large Mountain level (Fought and defeated Portgas D. Ace, nearly breaking his neck with a single strike. Could hurt Whitebeard, though this is an unreliable feat as the latter was on the verge of death from hundreds of previously accumulated injuries. After acquiring the Gura-Gura no mi, he became even stronger.) | Likely Country level (Scaling from the 3 other Yonko of his era, he should not be much weaker than them. He was also confirmed to have bested Marco and the rest of the WB commanders. It was described as being completely one-sided, and a humiliating loss for the WB pirates), can negate durability with internal vibrations.

Speed: At least Massively Hypersonic+ (Kept up with Ace without missing a beat in their battle, and also intercepted Gear 2nd Luffy mid-attack with Kurouzu), possibly Relativistic+ (Parried Whitebeard's attacks and fought Sengoku off-screen) | Relativistic+ (Defeated Marco. Should be comparable to his Yonko peers)

Striking Strength: At least Mountain Class+, Possibly Large Mountain Class (Physically stronger than Ace, as he nearly broke his neck in a single strike despite being staggered by an attack) | Likely Country Class

Durability: At least Mountain level+, possibly Large Mountain level (Tanked many blows from Ace) | Likely Country level (Should not be much weaker than the Yonko)

Stamina: Very high, fought Ace for an extended period of time while sustaining several attacks yet displayed no signs of strain or fatigue, also endured Magellan's poison and recovered completely after receiving an antidote, was still going strong after fighting with Sengoku when the Marineford Battle concluded

Intelligence: Adept fighter (Was considered Whitebeard Commander caliber by virtue of his basic combat prowess, before he ate the Yami Yami no Mi) with decades of battle experience in the grim and feral New World, very cunning and ruthless, schemed against the Whitebeard pirates, leads his own pirate crew, quickly learned to access and use the Yami Yami no Mi efficiently after eating it, was able to utilize the Gura Gura no Mi to a significant extent moments after absorbing it)

Weaknesses: Standard Devil Fruit users weaknesses. He's overconfident in his abilities and inclined to underestimate opponents, the Yami Yami no Mi does not give him access to an elemental state where he can disperse, reform and regenerate, his gravity powers has the perpetual consequence that things such as his opponents attacks are attracted to him, which increases the power of the attacks and consequently the damage he takes from them 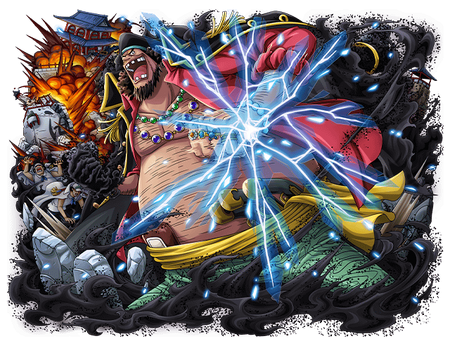 Yami Yami no Mi (Darkness-Darkness Fruit): A Logia type Devil Fruit, this fruit allows the user to control gravity (can use this ability to irresistibly pull the opponent to them, regardless in what state they're in), nullify Devil Fruit abilities by simply touching an opponent and absorb physical matter, energy as well as attacks of any type by sucking it into darkness. It can also absorb the abilities of at least one other Devil Fruit for personal use. It is not known whether more can be obtained in this manner.

Gura Gura no Mi (Tremor-Tremor Fruit): A Paramecia type Devil Fruit that turns the user into a Quake Human, allowing the user to create vibrations (or "quakes"). This fruit's major strength is that it allows the user to generate massive vibrations, or shock waves, which can travel though virtually any medium, including the ground, the seafloor, or even in the air. The different techniques Blackbeard have so far demonstrated with it are listed below (note: since Blackbeard haven't named any of his moves with the Gura Gura no Mi, the names used are simply placeholders, to distinguish the techniques from each other).

Note: Current Blackbeard is still featless, so it is unknown how powerful he exactly is, he only has powerscaling from Old Whitebeard to determine how powerful he is for now until he get's more feats.

Start a Discussion Discussions about Blackbeard (One Piece)