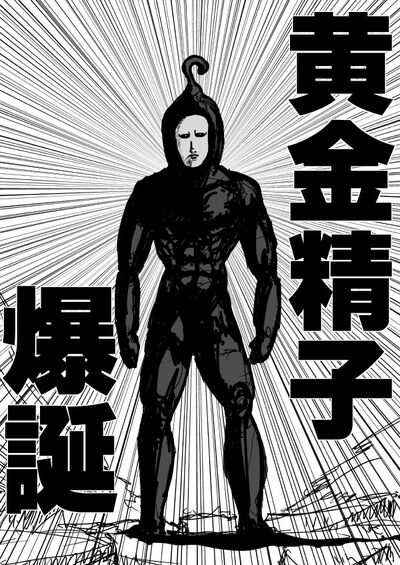 Black Sperm (Kuroi Seishi; 黒い精子) is a monster who first appeared during the S-Class Heroes' attack on the Monster Association. Despite his dull appearance and small stature, he is one of the Association's most powerful members and is easily a high-end Dragon level threat capable of defeating even S-Class Heroes. He first appears when Busaiku is separated from Garou, chasing after and tormenting the child. Atomic Samurai steps in but is soon overwhelmed due to Black Sperm's ability to split into numerous versions of himself, as well as regenerate whenever one of his selves is killed. When Tatsumaki destroyed the Monster Association HQ, Black Sperm and several other Dragon level monsters emerged from the rubble to attack her. After Psykos temporarily cut off Tatsumaki's psychic power, the monster grabbed her in a giant arm while attempting to crush her. The esper was saved by Genos, though the cyborg immediately had his arms ripped off by Black Sperm and Gums. Once Bang joined the fight and effortlessly killed two of the Monster Association's remaining members before being knocked out by Homeless Emperor, Black Sperm took this opportunity to knock Bomb unconscious.

After King managed to buy some time against the remaining monsters, Tatsumaki began to recover and turn the tide of the battle. In an attempt to defeat her, Black Sperm fused one trillion copies of himself into the much stronger Multicell Sperm, though the newly formed fusion is effortlessly killed by the hero. Sending a thousand copies of himself to perform a kamikaze attack against Tatsumaki and buy about 20 seconds, Black Sperm takes Busaiku hostage, forcing the heroes to stand and watch as he fuses 10 trillion of himself into his ultimate form, Golden Sperm. This new form proves incredibly dangerous, as Golden Sperm takes down Tatsumaki so fast, nobody else could even follow his movement with their eyes. However, this victory proves short-lived, as the newly mutated Garou shows up, destroying 99 of the 100 remaining copies of Black Sperm and killing Golden Sperm after a brief battle that none of the heroes could even see. Now down to only one life, Black Sperm slips away to watch the fight from afar. The next day, after encountering Saitama, Black Sperm and Overgrown Rover follow him home as pets. The two formerly dangerous monsters are currently entrusted to Butterfly DX and Chain'n'Frog due to Forte losing a bet with Saitama.

Attack Potency: At least Small City level+ (Defeated Atomic Samurai with relative ease. Oneshot Bomb, easily defeated Genos, and fought on par with Sweet Mask) | Island level (Stated by Murata to be comparable to Orochi. Easily defeated a weakened Tatsumaki, ONE implied that she would have difficulty defeating him even at peak condition)

Speed: At least Massively Hypersonic (Able to tag Atomic Samurai) | Sub-Relativistic, likely Sub-Relativistic+ (Blitzed Tatsumaki so fast that none of the other heroes could see his attacks while he appeared to simply be walking by. Possibly comparable to a prime Tornado of Terror)

Lifting Strength: At least Class M (Comparable to Sweet Mask. Even a small portion of him is able lift hundreds of tons of rubble off of himself) | Unknown. At least Class M, likely far higher

Striking Strength: At least Small City Class+ (Was able to knock out Bomb with one blow) | Island level

Intelligence: While he initially appears rather single-minded and straightforward, he is incredibly sharp in combat and was one of the few monsters in the Association to use tactics and outmaneuver his foes

Weaknesses: If his cell stock gets low, he'll become weaker and eventually be unable to regenerate or make copies | Can no longer regenerate after permanent fusion