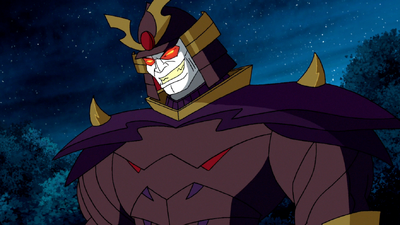 Black Samurai was a Ronin that asked for a blade from the legendary swordsmith Masamune, but due to the length that would take for said sword, he took the cursed sword of fate that corrupted him, before he was bested by Green Dragon and sealed by him.

Age: Unknown (Was alive at the time of the legendary Masamune and spent centuries stuck on his sword)

Powers and Abilities: Superhuman Physical Characteristics, Electricity Manipulation, Magic, Sword Mastery, Telekinesis (Forced bystanders to bow to him with his magic), Flight, Weather Manipulation (Made rain lightning bolts from the sky), Can walk on water, Immortality (Type 8 as he relies on his sword)

Attack Potency: Town level (His clash with the Green Dragon in the ancient times created a considerable earthquake)

Speed: Transonic (Should be comparable to the Green Dragon)

Durability: Town level (Fought with the Green Dragon before he was sealed in the sword of Doom)

Intelligence: At least average (He is a master swordsman, has shown to recognize the Sword of Fate just by looking)

Weaknesses: If his sword is destroyed he de-ages back to his old body.