VS Battles Wiki
Register
Don't have an account?
Sign In
in: Characters, Marvel Comics, Male Characters,
and 53 more 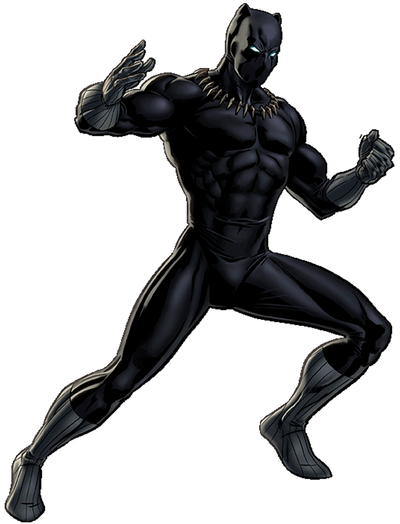 The Black Panther (T'Challa) is a fictional character appearing in publications by Marvel Comics. Created by writer-editor Stan Lee and penciller-co-plotter Jack Kirby, he first appeared in Fantastic Four #52 (July 1966).

Tier: 8-C. Higher as King of the Dead. Up to 5-A with preparations and technology.

Classification: Human, King of Wakanda, Avenger, King of the Dead

Attack Potency: Building level (Consistently shown as Captain America's equal. Has fought Wolverine. Far superior to Karnak. Stronger than Deadpool). Higher as King of the Dead (He received the combined power and knowledge of all Black Panthers who have ever lived). Up to Large Planet level with preparations and technology (Capable of harming the Hulk, Iron Man, and Namor)

Speed: Transonic with Massively Hypersonic+ combat & reaction speed (Comparable to Captain America. Dodged a glider thrown by the Hulk in a microsecond)

Striking Strength: Building Class (Causes craters in the ground during combat, throws people through brick walls, and is considered on par with the likes of Captain America). Up to Large Planet Class with preparations and technology.

Durability: Building level (Endures attacks from Captain America. Daredevil was "too weak to do any harm" to him). Far higher with the Panther Habit. Up to Large Planet level with preparations and technology.

Stamina: Very high (Can fight at peak exertion for 13 hours)

Standard Equipment: A suit of Vibranium-coated armor, including retractable claws made out of Antarctic Vibranium (anti-metal), which are capable of dissolving any other metal on contact, even Adamantium, Vibranium Energy Daggers, which can become intangible, negate durability, and can be set to shock mode. Flash marbles, explosive marbles. Vibranium Microweave Mesh, Various magical artifacts.

Intelligence: Extraordinary Genius. He is among the top 10 smartest men on the planet, has a PhD in physics from Oxford University, is a brilliant inventor, extremely skilled tactician and strategist, and has the skills to run a powerful nation. Also, he is a master of almost all martial arts styles, is a great gymnast and acrobat, a skilled hunter and tracker, and has many years of direct fighting experience against all kinds of foes.