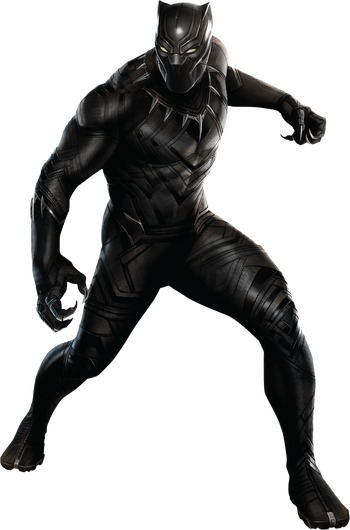 T'Challa, also known by the moniker of Black Panther, is the protector of the nation of Wakanda. Following the untimely death of his father T'Chaka, he inherited his father's position as king. In his rush to avenge his father, he became involved in the internal conflict among the Avengers, siding with Iron Man. However, upon seeing how vengeance drove Helmut Zemo's actions and subsequently Iron Man's as well, he saw the error of his judgement and became an ally to Captain America.

After his coronation, T'Challa began hunting down Ulysses Klaue, only to be confronted by his cousin Erik Killmonger, who sought the throne for himself. After a lengthy campaign, T'Challa defeated Killmonger and decided to introduce Wakandan technology to the United Nations.

Speed: Subsonic running speed (Comparable to Captain America and outran cars with ease) with Massively Hypersonic combat speed and reactions (Easily caught Hawkeye's arrows, stayed ahead of Captain America and can match him and the Winter Soldier in combat speed. Dodged automatic necroblasts from Sakaarans. Also comparable, if not superior to Scarlet Witch) | Peak Human with Massively Hypersonic combat speed and reactions (Should be comparable to the likes of Okoye and Shuri)

Lifting Strength: Class 100 (Should be nearly comparable to Captain America in terms of strength. Matched the Winter Soldier) | Peak Human

Durability: Building level physically (Was near the perimeter of a huge explosion and took little damage, took hits from the Winter Soldier. Survived being rammed by vibranium maglevs at top speed while his suit was disabled. Brushed off Ulysses Klaue's cannon-blast, which can destroy vibranium cars. Was able to resist several of Black Widow's Taser Disks). At least City Block level with his vibranium suit (Captain America's shield bounces off him), higher with updated version (Can absorb kinetic energy and sound energy. Was hit by a charging rhino). His kinetic energy absorption makes him hard to defeat | Wall level (Survived being thrown over a waterfall, albeit severely injured)

Intelligence: Above average. He has great deductive skills and diplomatic experience, designed his own Panther Habit, and is a skilled martial artist and tactician.

Weaknesses: The necklace of his suit, for the rest of his suit is generated from it. His new Panther Habit weakens under sonic attacks.