VS Battles Wiki
Register
Don't have an account?
Sign In
in: Characters, The Boys, Male Characters,
and 13 more 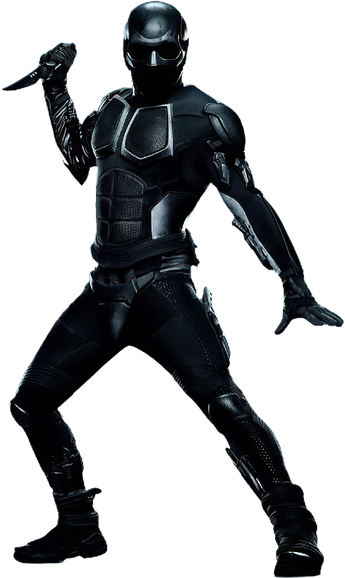 Black Noir is a member of of the Seven with heightened body condition and combat skills. Silent but deadly, he is one of the Seven's fiercest enforcers, especially when the team's darkest secrets are at stake.

Silent, stealthy, and enigmatic, Black Noir is The Seven's superpowered ninja. His super strength and heightened senses are matched only by his proficiency in the martial arts. Criminals run in terror at the mere mention of his name. Little is known about this lethal warrior, other than having trained with a master Sensei to become the death dealer he is at present. Whatever lies behind Black Noir’s mask is a complete mystery – which only makes him more terrifying.

Powers and Abilities: Superhuman Physical Characteristics, Weapon Mastery (Is highly proficient with daggers), Stealth Mastery, Vehicular Mastery (Said to be a skilled pilot), Expert Hand-to-Hand Combatant (Easily defeated Kimiko and made a complete joke out of Billy, Mother's Milk and Hughie in a fight), Status Effect Inducement (With Tear Gas), Acrobatics, Enhanced Senses, Social Influencing (Criminals are terrorized by the mention of his name. Caused Frenchie and Cherie to panic just by standing outside of their residence), Immense Pain Tolerance (Was completely unfazed by Naqib's self-detonation and took several makeshift bombs point-blank without flinching)

Attack Potency: At least Wall level+, likely Small Building level (Fought and ultimately defeated Kimiko, injuring her to the point where Frenchie thought she was dead. Killed Naqib, who survived his own explosive powers. Easily overwhelmed Starlight multiple times, if in part by higher skill. However, he was easily overpowered by Maeve and was unable to break her hold on him)

Speed: At least Superhuman (Was stated to move faster than a car by Mother's Milk)

Durability: At least Wall level+, likely Small Building level (Took multiple attacks from Kimiko and Starlight. While Queen Maeve restrained him, she decided to kill him by opening part of his mask and making him eat something he was allergic to, instead of other methods despite being in a hurry and having Noir grabbed from behind)

Intelligence: Above Average. Black Noir is one of the most prominent and popular members of the Seven, as well as one of the most efficient, to the point where he is the only member that Homelander doesn't criticize. He is a proficient knife user and athlete, a highly skilled and deadly martial artist, and is apparently a capable pilot. 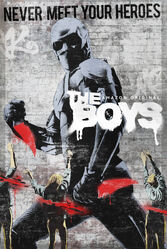 Black Noir on the Season 1 poster. 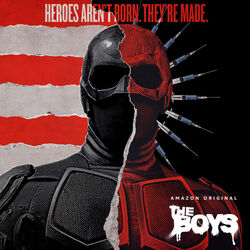