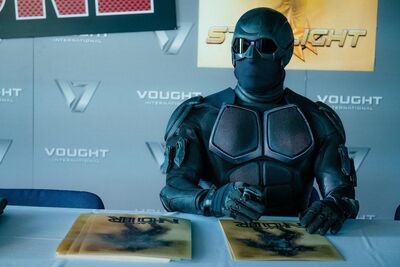 Black Noir is a member of of the Seven with heightened body condition and combat skills. Silent but deadly, he is one of the Seven's fiercest enforcers, especially when the team's darkest secrets are at stake.

Powers and Abilities: Superhuman Physical Characteristics, Weapon Mastery, Stealth Mastery, Vehicular Mastery (said to be a skilled pilot), Martial Arts, Acrobatics, Enhanced Senses, Fear Manipulation (caused Frenchie and Cherie to panic just by standing outside of their residence, criminals are terrorized by the mention of his name)

Attack Potency: Wall level (Fought and ultimately defeated The Female, injuring her to the point where Frenchie thought she was dead)

Retrieved from "https://vsbattles.fandom.com/wiki/Black_Noir?oldid=5035838"
Community content is available under CC-BY-SA unless otherwise noted.