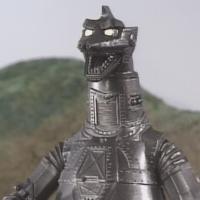 Black Mechagodzilla (ブラックメカゴジラ) is a mecha created by Toho that appeared in the 1997 Godzilla television series, Godzilla Island.

Attack Potency: Multi-Continent level (Fought on par with Godzilla. The powers of the Black Mechagodzilla are much like those of the silver Mechagodzilla, but they are approximately ten times stronger)

Durability: Multi-Continent level (Can withstand the force behind Godzilla's blows)

Range: Several meters due to size, Hundreds of meters with ranged attacks

Retrieved from "https://vsbattles.fandom.com/wiki/Black_Mechagodzilla?oldid=6005641"
Community content is available under CC-BY-SA unless otherwise noted.