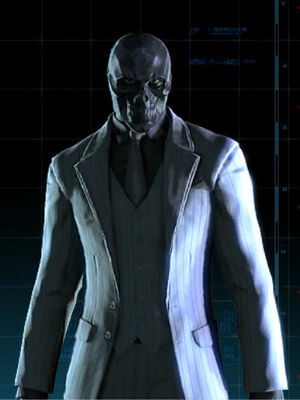 Following the suspicious deaths of his multi-millionaire parents in a fire, Roman Sionis inherited their fortune and then went on to bankrupt their company. Saved by a buy out from Bruce Wayne, Sionis came to resent and hate his rescuer. Fixated on the concept of masks, Sionis carved one from his father's black coffin and sought revenge, becoming the Black Mask. Sionis was a feared gang leader and one of the most powerful mob bosses in Gotham City, with a burning hatred of Batman.

Tier: 9-A, higher with guns

Attack Potency: Small Building level (Fought against Batman during the second year of his career as a vigilante and later Robin and was able to cause them difficulties. Fought against Red Hood for a while before being defeated although it was possible that it was a double and not the real Black Mask)

Speed: At least Supersonic+ (Fought evenly with Batman and Robin)

Stamina: High (Fought Batman while he was still injured after many days of torture in the hands of the Joker)

Intelligence: High. Before the Joker's arrival, Black Mask was feared by most everyone in the city and was one of the most powerful crime lords, who was known for his sadistic, brutal, and unconventional methods of torture. He kept virtually everyone who had influence in Gotham in his pocket, with either fear or blackmail, and controlled policemen, politicians, and judges. He is also paranoid and has the habit of using doubles in case he is targeted which has allowed him to stay in power for years in addition to his intelligence and tactical abilities. Even after the events of Origins, he managed to keep a position of power among the criminals of Gotham although he could never become as powerful as before. Sionis is known for being the only person ever to escape Arkham City.

Weaknesses: Normal human weaknesses. Was forced to have a pacemaker installed for Prolonged Q-T Syndrome.

Retrieved from "https://vsbattles.fandom.com/wiki/Black_Mask_(Arkham_Series)?oldid=5930122"
Community content is available under CC-BY-SA unless otherwise noted.