VS Battles Wiki
Register
Don't have an account?
Sign In
in: Post-Flashpoint, DC Comics, Comic Book Characters,
and 40 more 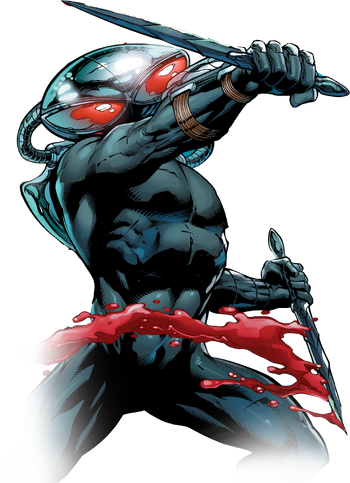 Black Manta, real name David Hyde, is an enemy to Aquaman and The Others. He has been on many super-villains teams such as the Legion of Doom, the Injustice League, and the Secret Society of Super-Villains.

Stamina: High (Can keep on fighting despite taking multiple hits)

Range: Standard Melee Range. Up to Tens of meters with most weaponry. Unknown with Optic Blast.

Intelligence: At least Genius (Trained for combat at a young age by his father, and honed experience over the years by fighting Aquaman, having expertise in many types of weaponry. Constructed his own suit, which is considered a technological marvel, and is a cunning strategist and leader)