VS Battles Wiki
Register
Don't have an account?
Sign In
Advertisement
in: Characters, Game Characters, Final Fantasy,
and 51 more 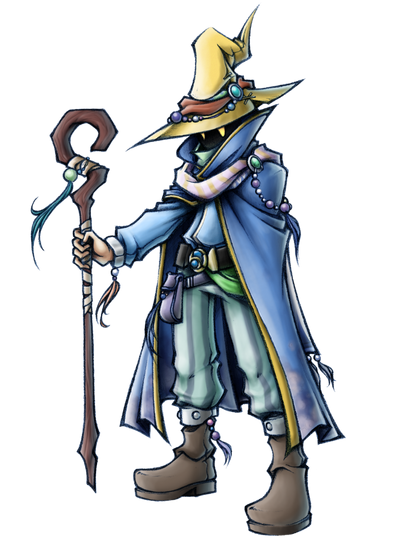 The Black Mage is one of the Warriors of Light destined to restore light to the Crystals and save the world from the wrath of the Four Fiends. A studious hermit whose face is always covered in shadow, he trades the ability to wear sturdy armor and use powerful weapons for the ability to wield destructive magic that can wreak havoc across an entire battlefield, bringing down the fury of the elements, bending the fabric of space, and manipulating time itself to support his allies from the rear.

Name: The Black Mage of Light

Superhuman Physical Characteristics,, Self-Sustenance (Type 1) and Underwater Breathing (Type 2; Can breathe underwater via Oxyale), Acausality (Type 1; Was unaffected by the time paradox he made when stopping the timeloop Chaos made in the past), Non-Physical Interaction (is capable of hitting Chronodia, the abstract concept of time itself), Magic, Subjective Reality (Magic, in its basest form, is projecting one's inner mind onto reality, and is powered by intelligence and mental strength), Durability Reduction (Magic ignores durability to physical attacks, requiring specific resistances to reduce the damage of), Forcefield Negation, and Intangibility (Magic negates conventional physical durability, barriers, and armor, requiring specific defense against magic which is powered by the Mind and Spirit), Power Modification (Including Duplication, Fusionism, Statistics Amplification, Size Manipulation, Homing Attack, Danmaku, Aura, Breath Attack, and Energy Manipulation; Magic users across the games have consistently shown the ability to manipulate the shape and properties of their own magical abilities, with even higher tiers of spells simply being considered stronger versions of the same basic ability), Elemental Manipulation (Of the Ice, Darkness, Fire and Thunder variety), Heat Manipulation (In the form of Flare), Poison Manipulation (via Scourge), Time Manipulation/Stop (In the variety of speeding himself/his allies up via Haste and slowing/stopping opponents via Slow and Stop), Sleep Manipulation (Via Sleep), Death Manipulation (Via Death/Kill), Teleportation (Via Teleport), Dimensional BFR (Via Warp), Petrification (Via Break), Sleep Manipulation and Mind Manipulation (Via Sleep and Confuse), Status Effect Inducement and Perception Manipulation (Via Blind), Paralysis Inducement (Via Hold), Statistics Reduction (via Focus and Focara), Statistics Amplification (Via Temper), Earth Manipulation (Via Quake), Soul Manipulation (Is capable of interacting with and killing souls), Space-Time Manipulation and Time Travel (the 4 crystals are capable of warping space and time, as well as being able to send someone back in time)

Attack Potency: Low Multiverse level (Is comparable to the Warrior of Light)

Speed: Massively FTL+ (Can keep up with the Warrior of Light)

Durability: Low Multiverse level (Comparable to the Warrior of Light)

Range: Extended melee range with weapons; much higher with magic

Intelligence: Skilled mage and combatant, bested Garland in mortal combat, previously Cornelia's greatest Knight (of which was implied to be worth the entirety of Cornelia's remaining military might alone due to the Kingdom's failure to rescue Princess Sara themselves), fairly competent at problem solving with little information available

Note: This profile assumes the Black Mage of Light is the Black Wizard class from the original game.